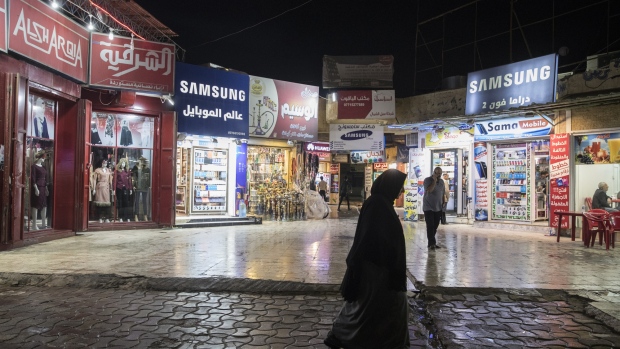 Pedestrians walk past stores in the commercial district of East Mosul, Iraq, on Monday, Nov. 5, 2018. The Iraq Central Organization for Statistics is schedule to release consumer price index (CPI) figures by November 25. , Bloomberg

(Bloomberg) -- The U.S. granted Iraq a 120-day waiver from sanctions to let the nation import electricity from Iran, the State Department said on Saturday, as tensions between Washington and Tehran build over recent attacks on two oil tankers in the Gulf of Oman.

The decision by the Trump administration to allow Iraq to continue buying power from neighboring Iran, which is under U.S. economic sanctions aimed at its nuclear program, followed a phone call Friday between Secretary of State Michael Pompeo and Iraqi Prime Minister Adel Abdul Mahdi.

“While this waiver is intended to help Iraq mitigate energy shortages, we continue to discuss our Iran-related sanctions with our partners in Iraq,’’ the State Department said in an emailed statement.

“We are also continuing to work with Iraq to end its dependence on Iranian natural gas and electricity and increase its energy independence,’’ according to the statement. “Expanding the use of Iraq’s own natural resources and diversifying energy imports away from Iran will strengthen Iraq’s economy and development as well as encourage a united, democratic, and prosperous Iraq free from malign Iranian influence.’’

President Donald Trump on Friday accused Iran of being behind the attacks a day earlier on two oil tankers in the Strait of Hormuz, the strategic energy-supply choke point that Iran borders connecting the Gulf of Oman and the Persian Gulf. Iran has denied any responsibility.

The attacks came as the U.S. continues to increase pressure on the government in Tehran by tightening financial sanctions related to the country’s nuclear program. Preventing the sale of Iranian oil and natural gas overseas is one of the main targets of those sanctions.

--With assistance from Khalid Al-Ansary.

To contact the reporter on this story: Shawn Donnan in Beijing at sdonnan@bloomberg.net

To contact the editors responsible for this story: Simon Kennedy at skennedy4@bloomberg.net, Steve Geimann, Linus Chua