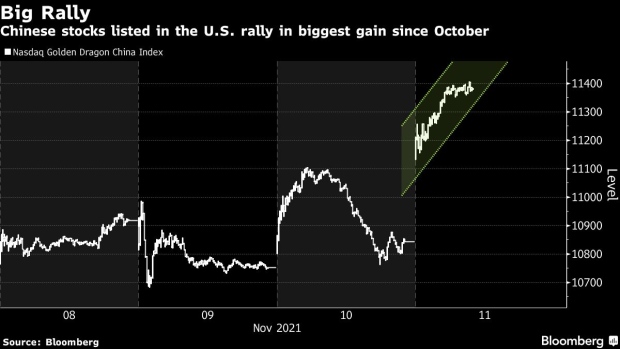 (Bloomberg) -- Shares of Chinese companies listed in the U.S. are rallying Thursday amid investor optimism after blowout Singles’ Day sales and a report that Didi Global Inc. is getting ready to relaunch its apps.

The Nasdaq Golden Dragon Index jumped as much as 5.2%, the biggest intraday climb since Oct. 7, after Alibaba Group Holding Ltd.’s Singles’ Day shopping festival posted record sales. A report that ride-hailing company Didi Global is getting ready to launch its apps in China by the end of the year also gave stocks mired in Beijing’s regulatory clampdown earlier this year a boost.

Alibaba gained as much as 3.5%, while other tech stocks like JD.com Inc. soared 8.3% and Pinduoduo Inc. rallied 7.7%. Didi’s shares fluctuated between gains and losses Thursday.

“The solid Singles’ Day performance alleviates some recent concerns around weakness in consumption trends in China,” said Barclays analyst Jiong Shao in an email. “The group has been under a lot of pressure since earlier this year with many stock prices having been cut in half or more. Hopefully this is the beginning of a sustainable rebound for the group.”

The broad rally in American depository receipts of Chinese companies comes after the Hang Seng Tech Index climbed 1.8% to close at the highest level in more than two weeks, with Meituan Inc. and Alibaba Group Holding Ltd. being the largest contributors.

A spate of positive news in the property sector is also adding to investor exuberance that Beijing may be relaxing restrictions on how developers raise funds. Dow Jones said China’s central bank is considering easing rules to help developers sell assets to avoid defaults, after a similar report by local media Cailian. On Wednesday, the state-run Securities Times reported that rules for developers to issue domestic bonds may be loosened.

It’s, however, still too early to say if this could be the turning point in China’s crackdown.

“There are still investor reservations,” said Michael O’Rourke, chief market strategist at Jonestrading Institutional Services. “In combination with the reports the government is easing property restrictions investors are gravitating the largest most established names first in hopes of a more receptive business environment.”