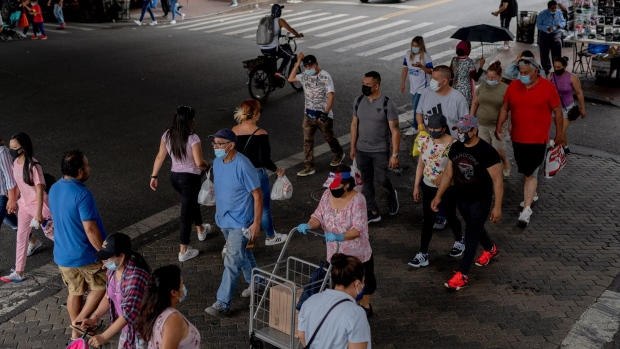 (Bloomberg) -- Income was surging for U.S. households while the national poverty rate fell in 2019, indicating the finances of many Americans were improving before the Covid-19 pandemic upended the U.S. economy and threw millions out of work.

Median, inflation-adjusted household income increased 6.8% last year to $68,703, according to annual data released Tuesday by the U.S. Census Bureau. The poverty rate fell by 1.3 percentage point to 10.5%, the lowest in data back to 1959 and the fifth straight decline.

The data help flesh out the picture of American families’ economic health during times when the jobless rate hovered near a half-century low of 3.5%. Since then, the pandemic put tens of millions out of work and exacerbated existing inequalities, with lower-wage workers at places such as hotels and restaurants facing the brunt of job losses.

The government’s stimulus checks and extra $600 a week in jobless benefits helped soften the blow, supporting incomes and spending amid widespread unemployment. As a result of this assistance, researchers found poverty actually declined in the April-June period compared to the pre-pandemic January-February period.

But that government assistance proved to be temporary -- with the supplemental jobless benefits expiring in July -- and lawmakers are at a standstill over another stimulus package. The same researchers also found poverty rose by a full percentage point for July and August compared with April to June.

The female-to male earnings ratio as well as the Gini index, a measure of income inequality, were not statistically different from the prior year, according to Census.

Tuesday’s report also showed the share of Americans without health insurance amounted to 8%, or 26.1 million people, in 2019. The reality likely looks worse today, given that in America, losing one’s job also frequently means losing one’s health insurance. Millions are estimated to have lost their health coverage since the onset of the pandemic.