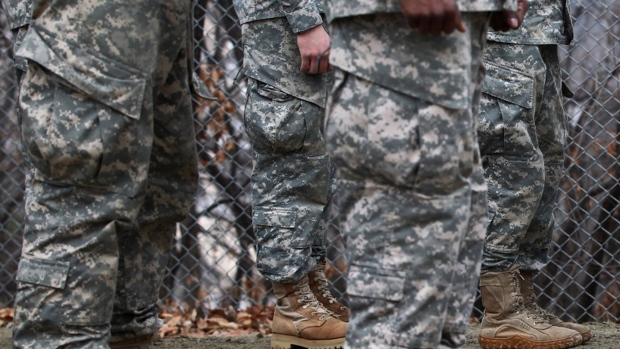 (Bloomberg) -- The U.S. Defense Department is “doing everything it can” to root out extremism in the ranks after some troops and veterans joined the Capitol siege on Jan. 6, Pentagon leaders said Thursday.

Troops, as well as members of the National Guard now flocking to Washington to provide security for President-elect Joe Biden’s inauguration, are continuously evaluated for involvement in White supremacy, criminal gangs, and hate groups, said Garry Reid, the director for defense intelligence.

That includes background investigations when enlisting and insider threat programs. The agency is also assisting federal law enforcement with investigations into the Capitol breach.

“Simply put, we will not tolerate extremism of any sort in DoD,” Reid told reporters in a briefing from the Pentagon.

The Pentagon inspector general separately announced Thursday that it will open an investigation into White supremacy and gang activity.

The watchdog will review how well the military prohibits advocacy and participation related to supremacist, extremist or criminal gang doctrine, ideology, or causes, Carolyn R. Hantz, assistant inspector general for evaluations, said in a memo.

The review was “was planned oversight work based our situational awareness about what is going on in DoD,” said Dwrena Allen, spokeswoman for the inspector general’s office.

“The issue of white supremacy and extremist ideology within the ranks of our military is not new, but the attack on the Capitol makes clear this alarming trend must be immediately addressed,” a group of Democratic senators and independent Bernie Sanders wrote in a letter Thursday to acting Pentagon inspector general Sean O’Donnell.

Air Force veteran Ashli Babbitt was fatally shot by Capitol security as she and other rioters tried to break into the House chamber. The Army is investigating an officer who led a group to the pro-Trump rally, a retired Air Force colonel who was arrested after he was photographed inside the Capitol with a military-style helmet and zip ties, and a Navy veteran in a buffalo headdress who was arrested after breaking into the Senate chamber.

The military has seen a rise in extremist activity over the past year among both activity-duty troops and veterans as the wider American society has become politically polarized, a senior defense official told reporters.

Increases in military extremism are partly due to more internal reporting, the official said. But the Pentagon couldn’t provide statistics on the number of cases or how they were resolved.

Acting Defense Secretary Christopher Miller ordered a review last month of the Pentagon’s policies on extremism and hate groups. A report with recommendations is due in June.

Pentagon leaders moved to rename bases that honor Confederate figures last year as protests over racial inequality rocked the country. The renaming was strongly opposed by Trump but Congress ordered it to proceed as part of the annual defense policy law that that was was approved over his veto.