Natural gas is the place to be: UBS Canada’s Pierre Ouimet

U.S. natural gas futures suddenly spiked the most on record Thursday afternoon, a dramatic move that signaled bearish wagers being squeezed out of the market.

The eye-popping surge of as much as 72 per cent came ahead of the expiration of the February contract, which was thinly traded, as weather forecasts turned colder. A spokesperson for CME Group confirmed the price jump, the most since the contract launched in 1990. The more-active March contract saw a gain of less than 10 per cent.

Gas prices have been volatile in recent weeks as traders try to gauge whether winter cold will strain stockpiles of the power-plant and heating fuel. The chillier shift in the weather outlook near the futures expiration contributed to the sharp increase in prices, traders said. In a short squeeze, traders exposed to wrong-way bets on lower prices rush to close out those positions by purchasing higher-priced contracts.

“The way the price whipsawed is a sign of a very classic commodity short squeeze,” said Campbell Faulkner, the chief data officer at OTC Global Holdings LP. “Frankly, there is no other good explanation. Even if we had a bomb cyclone going on, we wouldn’t see prices move this much.” 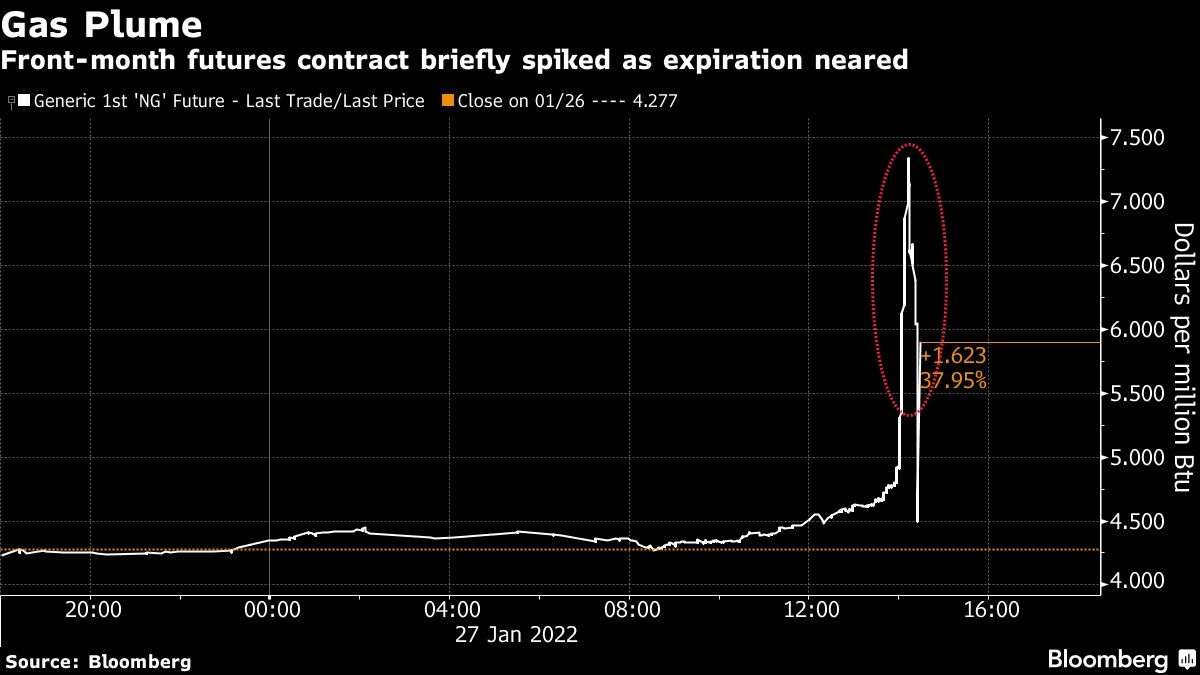 Though hedge funds have been net-long on U.S. gas contracts, indicating they expect prices to rise, money managers still held substantial short positions, according to data compiled by Bloomberg.

Changes to one weather model indicate that frigid conditions in the eastern and central U.S. could persist into the middle of February, said Matt Rogers, president of Commodity Weather Group.

“This is absolutely insane,” said Gary Cunningham, a director at Tradition Energy. “This is what happens when you end up short at expiration. I don’t know who leaves it until an hour before expiration to cover their shorts.”

Although U.S. gas inventories are only 1 per cent below normal for the time of year, exports have been near a record and production from shale basins has been relatively restrained.

The futures were trading below US$4.50 per million British thermal units for most of the session until around 12:45 p.m. in New York, when an upward surge kicked in that pushed prices above US$7. The February contract settled at US$6.265, the highest close since October.

The frenzy rippled through to later-month contracts, though less dramatically: The much more widely traded March futures climbed as much as 9.5 per cent.

The gas-futures market has grown increasingly vulnerable to an event such as Thursday’s in the last three months, as surging volatility prompted some investors to withdraw, reducing overall liquidity, said OTC’s Faulkner, who formerly worked in risk-management and analysis at Royal Dutch Shell Plc and JPMorgan Chase & Co.

In 2014, a trader agreed to pay US$750,000 to settle a CFTC lawsuit claiming he tried to rig gas contract prices by allegedly dumping a large number of futures contracts within the last 30 minutes of trading in a bid to drive down the closing price.