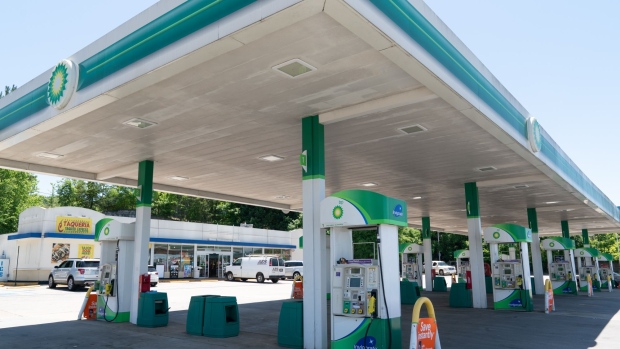 Closed pumps at an empty BP Plc gas station in Kennesaw, Georgia, U.S., on Thursday, May 13, 2021. Five days after a criminal hack shut down deliveries of almost half the gasoline and diesel burned in the eastern U.S., the Atlanta area's reserves of gas and diesel began to plummet. , Bloomberg

(Bloomberg) -- U.S. refiners may be jumping the gun in ramping up production of gasoline for the summer driving season.

After weathering more than a year of pandemic-related demand destruction, a massive Gulf Coast freeze, the temporary shutdown of the Colonial pipeline and weeks of spring rains, cash-strapped refiners may feel the worst is behind them and summer days will bring increasing demand.

In the week ended June 4, refinery runs jumped to the highest since February 2020. Capacity utilization climbed four weeks in a row, reaching 91.3%, the most since January 2020.

Yet, despite road traffic being largely back to levels seen before the pandemic, supply is outpacing demand. In the week ended June 4, the four-week rolling average for gasoline demand fell to the lowest seasonally since 2014, excluding 2020 when the spread of Covid-19 kept millions off the road and out of work. Overall demand for oil products dropped by about 1.4 million barrels a day.

On the Gulf Coast, which has the greatest concentration of U.S. refining capacity, rates were the highest, at 92.9%, and gasoline supplies are about 7 million barrels higher than the five-year average between 2014 and 2019.

Running harder after more than a year of cuts and postponing maintenance is also causing a rash of units to malfunction from California to Texas. Valero Energy Corp. had fires at two of its Texas plants last week, Three Rivers and Port Arthur.

Gulf Coast refineries, many of which rely on exports to Latin America to clear out inventories, will also find there is plenty of other foreign refinery capacity available, said Andy Lipow, president of Lipow Oil Associates LLC in Houston.

London energy consultancy Energy Aspects projects a strong recovery in demand to help clear the product overhang, although net exports of products still need to rise. It expects total U.S. stocks to fall below the five-year average by the end of July. But refiners need a signal to run “and that’s margins, and margins aren’t great,” said Amrita Sen, co-founder of Energy Aspects and head of research.

The Nymex 3-2-1 crack, a rough gauge of the margin refiners can capture with a barrel of crude based on futures prices in New York, fell to the lowest since March on Friday, while Gulf Coast margins were the lowest since February.

Refiners who don’t do their own blending of ethanol into gasoline to meet federal biofuel requirements are also paying a premium of more than 20 cents for every gallon of gasoline.

They would need more consistent signals for stronger demand ahead. “It’d be nice if we saw a little more consistency over these next few weeks, particularly around gasoline,” said Phil Gresh, senior equity analyst for North American oils and refining at JPMorgan Chase & Co.

Refining margins (as of previous session, in $/bbl)