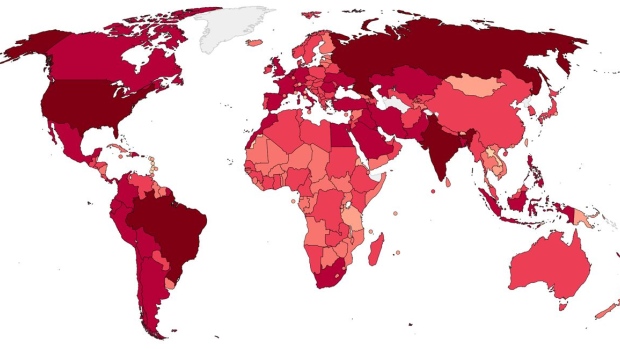 U.S. coronavirus cases increased by 69,276 cases, the most since late July. Infections are rising in most parts of the country less than three weeks before the election. Florida, hit hard this summer, reported the most cases since August. California and Texas both neared 17,000 fatalities.

Daily cases in France rose to a record 32,427. Italy is considering the tightest restrictions since its spring lockdown ended as new curbs come into effect in Paris and London. The nation broke another record for daily cases amid the continuing surge of infections across Europe.

Chancellor Angela Merkel appealed to Germans to stay home and meet with fewer people whether inside or outside. A person in the same Vatican residence as Pope Francis tested positive.

Brazil reported 24,062 cases, ending a week with the fewest new infections in five months, according to the nation’s Health Ministry. Total cases are 5,224,362. Another 461 people died for a total of 153,675. The week’s toll was the least deadly since the beginning of May, according to the ministry website.

Coronavirus fatalities neared 17,000 in both California and Texas on Saturday. California added 69 deaths and now has 16,899, while 81 more people succumbed to Covid-19 in Texas, for a total of 16,984. California, with 10 million more people than the less densely-populated Texas, was among the first states to institute social-distancing guidelines aimed at slowing the infection’s spread.

Ohio broke a record for new cases Saturday, the fourth straight day reporting more than 2,000 daily infections. Another 2,234 people were infected, the state reported, for a total of 180,225. The Buckeye State has added 30,000 cases in the last three weeks, for an average daily increase of 1,439.

Like Wisconsin, Ohio is a swing state hit badly by the virus just before a presidential election in which President Donald Trump’s handling of the outbreak is a central issue.

Indiana broke a record for new infections for the second day in a row, amid an unrelenting surge of cases in the Midwest. The state reported 2,521 cases, and while it said 100 were added old cases, the number still topped the record set Friday of 2,283. Total cases, rising since mid-September, are now 145,977 and deaths 3,685.

Coronavirus restrictions triggered the first mass protest in Slovakia, with hundreds of demonstrators opposing mandatory face masks and other restrictions in the east European Union nation violently clashing with the police.

Police used water cannon and pepper spray to disperse the crowd, which -- in violation of a nationwide ban on association of more than six people -- gathered in front of the Government Office in the capital, Bratislava. The police whose Facebook video showed protesters throwing stones said “several” people have been detained.

After being one of the best countries in handling the first wave of the pandemic, new Covid-19 infections have been on the rise in Slovakia. The country registered 1,968 new cases on Friday, close to the record, and 11 deaths. The government this month banned all public events, closed bars and restaurants and imposed a requirement to wear face masks outdoors, seeking to drastically limit the movement of people.

France reported a record 32,427 new coronavirus cases in the past 24 hours as tighter restrictions went into effect in the country’s major cities to try to check the outbreak.

The government has put in place a curfew effective Saturday in the Paris region and eight other metropolitan areas, confining people to their homes between 9 p.m. and 6 a.m. for four weeks.

The number of new cases surpassed the previous record of 30,621, set Thursday, according to statistics on France’s national health agency website.

Ireland recorded 1,276 new infections on Saturday, among the highest levels since April. The new figures came as senior government members met to consider a recommendation from health authorities that Ireland move to a Level 5 lockdown, the strictest, for six weeks. The nation is mostly at Level 3, with some border areas at Level 4.

Cyprus imposed new measures to contain the virus across the country, while it decided to close all restaurants, bars and cafes from 10:30 p.m. in Limassol, the second-largest city of the small Mediterranean island.

The government decided to take further action after a week in which Cyprus broke case records on three days. Cyprus reported another high on Saturday, with 202 new confirmed cases.

A person living in the same Vatican residence as Pope Francis has tested positive, was moved out and placed into isolation, Vatican spokesman Matteo Bruni said Saturday.

All people in contact with the infected person, reportedly asymptomatic, were also moved out of the Casa Santa Marta and placed in isolation, the Catholic New Service reported. Two days ago, the Swiss Guard, which helps protect the pope, announced 11 cases among a total of 135 soldiers.

Deloitte LLP will close four of its 50 offices in the U.K. as a way to cut costs as more staff work at home, the Financial Times reported.

About 500 employees working for Deloitte will be moved to other locations or be allowed to work remotely full time, the paper said. The accounting firm has about 19,000 employees in the U.K. and is one of the first large companies to not renew leases on office space as a result of the pandemic-induced shift to work from home, the newspaper said.

Governor Andrew Cuomo said New York is shifting its strategy for combating the coronavirus, targeting small infected areas for restrictions rather than by larger regions or counties. The new strategy comes, he said, as infections could rise with colder weather and people spending more time indoors.

The state began the strategy -- possible he said because of widespread testing -- in hot spots in New York City and two upstate counties late last month. Already, he said, positive tests are declining.

“It’s much smarter,” he said, adding that the strategy would be in place at least until a vaccine is widely available. “It’s more effective. It’s also less disruptive.”

The state reported 1,784 cases, a 0.4% increase compared with an average 0.3% daily increase of the previous seven days. Another nine people died.

Movie theaters outside of New York City will be allowed to reopen at 25% capacity with up to 50 people per screen, beginning Oct. 23, the governor said.

The U.K. reported another 16,171 cases of coronavirus on Saturday and 150 deaths. The country has added more than 100,000 cases since Sunday, almost 15% of the cumulative total of 705,428. London and suburban Essex were among the locations to move to increased restrictions today, with people banned from meeting indoors with people outside their households.

Florida reported 4,044 new Covid-19 cases on Saturday, the most since Aug. 22, with the exception of two so-called data dumps that didn’t necessarily reflect current trends. Overall, cases rose to 752,481 over the course of the pandemic, according to the health department.

Florida, along with Texas, California and Arizona, was among the hardest hit states in a summer surge of infections in the Sun Belt. Cases have been rising again around the nation, especially in the Midwest.

Italy reported 10,925 new coronavirus cases Saturday, the most in one day since the outbreak began; 47 people died compared with 55 Friday.

Italian Prime Minister Giuseppe Conte’s government may approve new restrictions on public life as early Saturday evening, according to government officials, who asked not to be named in line with their policy

China’s Center for Disease Control and Prevention said it found active Covid-19 virus on the outer component of refrigerated food packaging, adding that it showed the possibility of infection via such contaminated surfaces, according to state broadcaster CCTV.

The virus was found on food packaging in the coastal city of Qingdao in Shandong province, the report said, without specifying the origin of the product. Qingdao has reported a dozen new virus cases this month, most linked to a hospital where infected travelers from overseas are being treated.

The country’s king and his wife scrapped a vacation trip to Greece after an outcry at home as Dutch people were asked to travel as little as possible.

Belgian foreign minister and former prime minister Sophie Wilmes said she had tested positive for coronavirus. The infection probably occurred within her family circle, she said in a Tweet.

Belgium is one of the countries most affected by the pandemic’s resurgence in Europe. The country’s 14-day running Covid-19 incidence rate is still rising and jumped to 621 per 100,000 population.

Testing continues to increase, Health Minister Maksym Stepanov said in a televised briefing. The situation in hospitals is “quite tense” and the government is mulling whether to hire medical students who are near completion to help.

Two vaccines stalled by potential side effects have one key feature in common: Both are based on adenoviruses, cold germs that researchers have used in experimental therapies for decades with varying results.

Johnson & Johnson’s and AstraZeneca Plc’s pauses are reviving questions about adenoviral vectors, which have been used in laboratory, animal and human experiments for years. In some cases, the experiments have succeeded, but not always.

U.S. cases increased by 69,276, the fourth consecutive day of rising numbers and the most since July 29, according to data compiled by Johns Hopkins University and Bloomberg.

The number, which reflects Friday data, is 9% higher than the previous day’s, underscoring rising Covid-19 cases in most parts of the country less than three weeks before the election.

The phase 2/3 trial will be a randomized controlled study that will include safety and immunogenicity, according to the Russian Direct Investment Fund. The Kremlin has pinned great hopes on the vaccine, which President Vladimir Putin is promoting as the first registered inoculation in the world.

India added 62,212 new cases, taking the total infections in the country to 7.43 million, according to government data.

Italy is considering new restrictions on nonessential activities in a bid to contain the jump of new cases, which topped 10,000 for the first time on Friday.

Health Minister Roberto Speranza met with regional leaders Saturday morning to discuss the measures that are expected to be approved by Giuseppe Conte’s government as early as Saturday evening, according to three government officials, who asked not to be identified.

How winter and Christmas pan out will be decided in the coming days and weeks through the sum of individual actions, Merkel said. She stressed the importance of refraining from unnecessary journeys and celebrations.

Poland registered a record 9,622 new cases and the death toll there climbed by 84 to 3,524, the Health Ministry said on Twitter. The country had 604 respirators in use, up from 346 a week earlier.

The Czech Republic posted a third consecutive record of new Covid-19 cases. The nation of 10.7 million people registered 11,105 new cases on Friday, bringing the total number of infections to 92,736. The army should start to build a field hospital in Prague this weekend to add extra 500 beds for patients who need to be hospitalized.

The Czech Republic is the worst hit country in Europe based on the two-week cumulative number of new infections and deaths, adjusted for population, according to the European Center for Disease Prevention and Control.