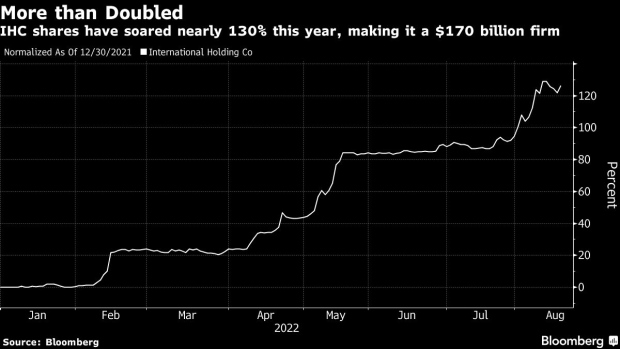 (Bloomberg) -- International Holding Co. plans to invest billions of dollars in markets including Indonesia, Colombia, Turkey and India as the United Arab Emirates firm controlled by the country’s national security adviser steps up its breakneck expansion.

IHC, the UAE’s most valuable listed firm, will target sectors such as food, infrastructure and health care across these countries and investments will range from $1 billion to $5 billion depending on the country and opportunity, Chief Executive Officer Syed Basar Shueb said in an interview.

“These new markets are more lucrative for us because they give decent returns and it gives us exposure to that country,” Shueb said. “Double-digit growth is the minimum of what we’re looking for.”

With investments ranging from Elon Musk’s SpaceX, to a local fishery and Abu Dhabi’s largest property developer, IHC is at the forefront of a drive to diversify the UAE economy and deploy its oil windfall overseas.

The company, whose market capitalization has rocketed to $170 billion within a matter of months, is controlled by the Royal Group, a conglomerate that lists Sheikh Tahnoon bin Zayed al Nahyan -- the UAE’s national security adviser and brother to the president -- as chairman.

Shares in IHC have soared 127% this year, leading a 21% gain on the FTSE ADX General Index and putting it among the top ten performing equity benchmarks in the world this year.

The company’s new expansion plans would build on recent trade agreements the UAE has made with countries such as India, Indonesia and Turkey, and would add to IHC’s already significant pipeline of deals.

“Being a smart investor, we want to take advantage of the government’s free trade agreements and other agreements with these countries” said Shueb. “That’s what makes us really create significant value for our shareholders.”

Developing-nation assets have gotten increasingly cheap since the start of 2021 after investors grew concerned about the impact Covid and hawkish central banks would have on their economies. The MSCI Emerging Markets Index is now trading at about 11.1 times forward earnings, hovering near valuations similar to the start of the pandemic.

Last week, IHC said it bought a 50% stake in a Turkish renewable energy firm with links to President Recep Tayyip Erdogan, marking the first major deal between the UAE and Turkey since a thawing of relations. This adds to an almost $2 billion investment in three companies owned by Indian billionaire Gautam Adani.

IHC is also studying potential investments in Israel, where the UAE has also inked a trade pact, as well crypto-related opportunities, Shueb said.