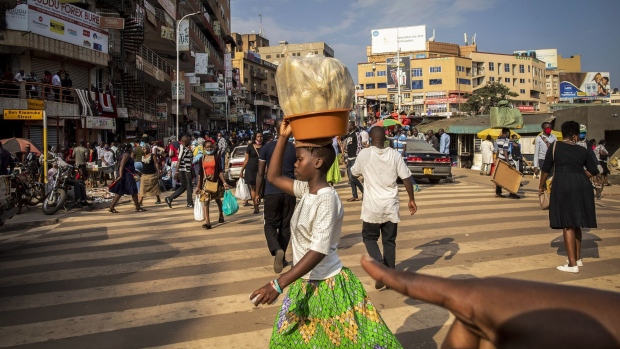 A girl carries corn husks on her head in Kampala, Uganda, on Thursday, July 23, 2020. Uganda's economy will probably expand at the slowest pace in more than three decades this year due to the fallout from the coronavirus pandemic, a locust invasion and floods, the World Bank said. , Bloomberg

(Bloomberg) -- The Bank of Uganda raised interest rates for a third straight meeting and signaled its willingness to boost rates further if inflation isn’t reined in.

Policy makers facing the most significant cost pressures in six years lifted the benchmark rate to 9% from 8.5%. That takes the increase in borrowing costs to 250 basis points since June.

Annual core inflation, which excludes food and energy, exceeded the central bank’s 5% medium-term target for a third successive month in July, accelerating to 6.3% from 5.5% in June. Headline price growth quickened to 7.9% from 6.8%.

Inflation forecasts for this year remain in the 7% and 7.4% range, Atingi-Ego said. Last month, Uganda held the first unscheduled monetary policy committee meeting to be called in Africa since Russia’s invasion of Ukraine upended supply chains and caused commodity prices to surge.

Supply shortages and a slide in the shilling spurred by foreign investors exiting risky assets around the globe has fanned inflation. The shilling has depreciated about 6% against the US dollar this year. By 2:15 p.m., the local currency gained 1.1% to 3,771.29 per dollar.

The rate hike means that Uganda has one of highest differentials between inflation and policy rates among more than 50 economies tracked by Bloomberg, making its assets more attractive to investors.

“Overall, economic growth prospects have been dimmed further with increasing risks of a global recession, and weaker consumer and business sentiment as high inflation and commodity prices continue to erode households and business incomes and financial conditions tighten,” Atingi-Ego said.