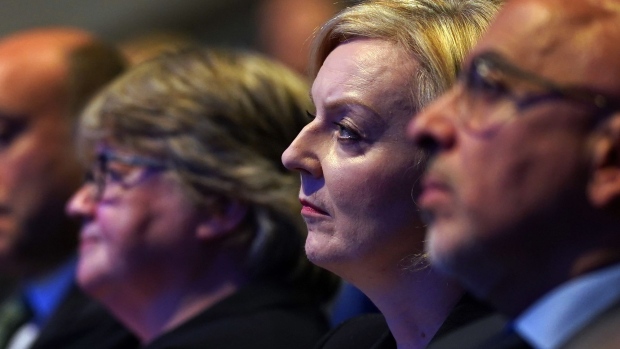 Liz Truss’s government is worried that persistent high US interest rates could cancel out the benefits of her program of deregulation and low taxes as she attempts to transform the UK economy.

Officials hope the US will ease off on its aggressive path of interest rate rises after November’s mid-term elections, a senior figure in the government said on condition of anonymity. If it doesn’t, the concern is higher borrowing costs for households and companies will undermine Truss’s promise that her plan can deliver growth before British voters go to polls in about two years’ time.

Truss has staked her premiership on a dash for growth. She and Chancellor of the Exchequer Kwasi Kwarteng are planning to set up new investment zones, cut red tape for financial firms and ease planning rules to speed up housebuilding. But her administration has been rocked by the market turmoil that followed from a massive package of unfunded tax cuts announced last month by Kwarteng.

Though the situation has stabilized -- aided by an intervention by the Bank of England to shore up the bond market -- consumers and companies face higher interest payments which may sap confidence and curtail investment.

Money markets are pricing the BOE’s key rate peaking around 5.5% next year, from 2.25% currently. That’s higher than market projections for the Fed, which is seen peaking below 5%.

Both Truss and Kwarteng have sought to blame the fallout on global pressures including the impact of the strong dollar and Russia’s war in Ukraine, which formed the backdrop to the chancellor’s economic statement on Sept. 23. Traders responded by driving the pound to a record low, though it has since rebounded.

But the currency is still down 16% against the dollar this year, helping to push up costs because Britain is a net importer. The BOE said Sept. 26 it is prepared to raise interest rates to keep a lid on inflation, a statement that has had the effect of pushing up mortgage rates and corporate borrowing costs.

The challenge for Truss will be showing the fruits of her reform agenda in time for Britain’s next general election, which must happen by January 2025 at the latest.

She also faces a major political challenge to get controversial economic measures done, after Conservative Members of Parliament forced her into a humiliating U-turn on a tax cut for the highest earners this week.

Pushing through unpopular ideas is one thing if they deliver growth, but the Tories are likely to face a reckoning from voters if benefits don’t materialize.

“It’s a difficult moment in global finance and a very delicate period,” Michael Spencer, a financial services billionaire who donated to Truss’s leadership campaign, said at an event at the Tory party conference in Birmingham. “All that we can do within the UK is focus on our own many great strengths and maximize those, without spending too much time looking over our shoulders.”