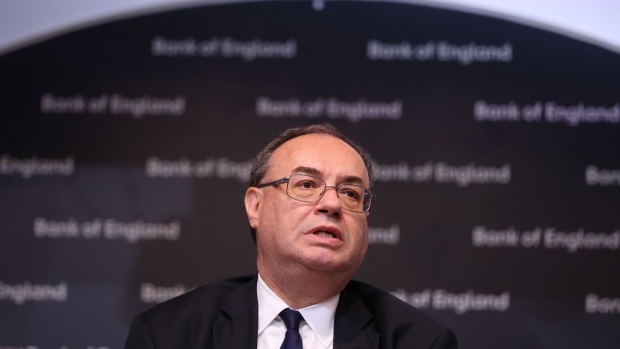 Andrew Bailey, governor of the Bank of England (BOE), during the Monetary Policy Report news conference at the bank's headquarters in the City of London, U.K., on Thursday, May 5, 2022. The Bank of England hiked interest rates to their highest level since the financial crisis and warned the economy is on course to shrink under pressure from double-digit inflation. , Bloomberg

(Bloomberg) -- The UK government distanced itself from Bank of England Governor Andrew Bailey’s comments on the cost-of-living crisis and his stark warning that consumers face an “apocalyptic” spike in food prices.

Boris Johnson said he didn’t share Bailey’s pessimism, telling broadcasters on Tuesday the UK has a “fantastic future” and that ministers “have the fixes” to combat high prices. Bailey told Parliament on Monday he felt “helpless” amid the recent surge in inflation spurred by high global energy prices.

The divergence is the latest sign of tensions between Johnson’s Conservative Party and the central bank, which has been criticized by senior Tory lawmakers in recent days for failing to keep a lid on inflation. The rate is expected to hit 10% this year, compared with the mandated target of 2%.

But Johnson’s comments also reflect the political risks facing his government over the record squeeze on UK living standards and the perception that it is not doing enough to help struggling Britons. The Tories lost hundreds of seats in recent local elections, and Johnson will be determined to counter any impression that inflation is out of control.

Cabinet minister Brandon Lewis said earlier he was “surprised” by Bailey’s comments. Asked about the governor’s remarks at a regular briefing, Johnson’s spokesman Max Blain replied: “It’s for him to justify the words he uses.”

The bank recently raised interest rates to 1%, with financial markets expecting further increases this year. It is trying to tread a path between curbing inflation without harming the UK’s post-pandemic economic recovery.

Last week, former UK Trade Secretary Liam Fox called for the bank to be investigated, saying it had consistently under-estimated the threat of inflation.

“It is the duty of central banks to safeguard the value of our money and our savings,” Fox said in the House of Commons. “The Bank of England persisted beyond any rational interpretation of the data to tell us that inflation was transient, then that it would peak at 5%.”

Fox’s intervention prompted similar from other Tories, some of whom fear the cost-of-living crisis will further damage the party’s support. Chancellor of the Exchequer Rishi Sunak is largely resisting demands to provide more assistance, arguing that extra fiscal measures risk stoking inflation even more.