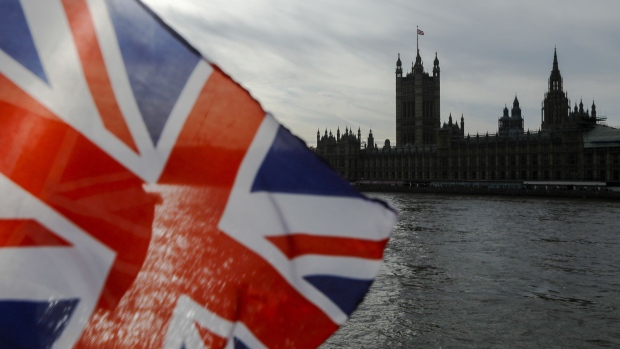 A British Union flag, also known as a Union Jack, flies from a tourist souvenir stall on the bank of the River Thames in view of the Houses of Parliament in London, U.K., on Wednesday, Oct. 30, 2019. U.K. Prime Minister Boris Johnson has succeeded, finally, in getting Parliament to give him the general election that he wants. Photographer: Luke MacGregor/Bloomberg , Bloomberg

(Bloomberg) -- The UK’s credit outlook was lowered to negative from stable by Fitch Ratings, which cited risk the government’s new growth plan could increase the nation’s fiscal deficit.

Fitch affirmed the UK’s rating at AA-, the fourth highest level, according to a Wednesday statement. The Bank of England’s outlook was also lowered to negative from stable by Fitch due to its link with the sovereign.

“The large fiscal stimulus, announced without compensatory measures or an independent evaluation of the macroeconomic and public finances’ impact, and the inconsistency between fiscal and monetary policy stance given strong inflationary pressures, have in Fitch’s view, negatively impacted financial markets’ confidence and the credibility of the policy framework,” analysts Erich Arispe Morales and Greg Kiss wrote.

Britain’s most radical package of tax cuts since 1972, combined with plans for large-scale borrowing, sent UK markets into a tailspin last week, with the pound hitting the lowest-ever level against the dollar while borrowing costs soared. The Bank of England stepped in to stave off an imminent crash in the gilt market by pledging unlimited purchases of long-dated bonds.