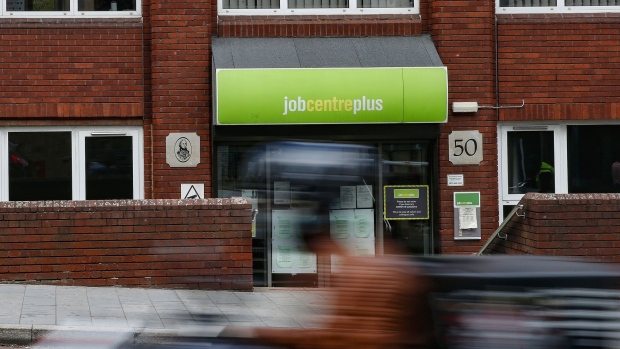 A motorcyclist passes a job centre plus employment office in London, U.K., on Friday, July 24, 2020. Almost half of businesses taking part in the U.K. government's coronavirus jobs program expect to let go of furloughed staff when support ends in October. , Bloomberg

(Bloomberg) -- Inflation and higher interest rates will push up the UK’s debt serving costs and social welfare spending by more than £50 billion ($60.7 billion) in the next fiscal year, according to Financial Times calculations.

The bill for servicing government debt will almost double, to £95 billion from £50 billion, given that about £500 billion of the country’s borrowing is tied to the consumer price index, the newspaper reported. Prices have risen to a 40-year high this year so far, with inflation expected to peak at over 13%.

While cost of repaying the loans may fall once price gains start easing, that will be offset by welfare payments which are anticipated to rise by £23 billion every year by the time of the next election, according the newspaper.

The situation could worsen further. The Bank of England has warned of a recession that would slow tax revenues amid higher costs, adding to the challenges facing the next prime minister.

Following the Spring Statement in March, the Office for Budget Control concluded that the government was left with £30 billion of headroom despite a package of tax cuts. That figure is contentious given how much the landscape has changed since the statement was delivered, including a 0.1% contraction in the UK economy in the second quarter.

In the leadership contest to become the next prime minister, Foreign Secretary Liz Truss and former Chancellor Rishi Sunak have relied on the March estimates to drive their economic agenda -- without factoring in the looming recession, soaring inflation and higher interest rates, according to the newspaper.