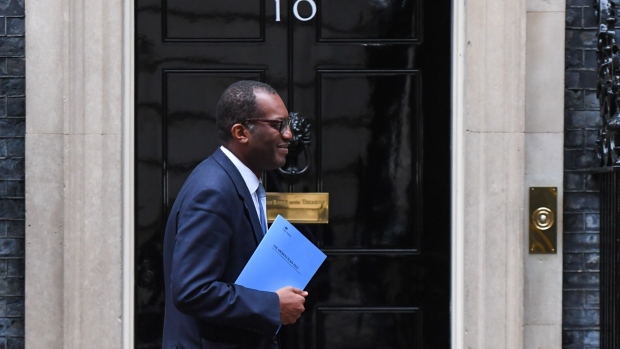 Kwasi Kwarteng, UK chancellor of exchequer, departs 11 Downing Street to present the UK's fiscal plans in Parliament, in London, UK, on Friday, Sept. 23, 2022. With expectations of tax cuts and sweeping deregulation, businesses are likely to be a big beneficiary of Kwarteng's mini-budget on Friday. Photographer: Chris J. Ratcliffe/Bloomberg , Bloomberg

(Bloomberg) -- Next year’s planned rise in UK corporation tax will be canceled, Chancellor of the Exchequer Kwasi Kwarteng confirmed in his mini-Budget.

“The UK’s corporate tax rate will not rise to 25% -- it will remain at 19%,” he told the House of Commons on Friday. “We will have the lowest rate of corporation tax in the G20. This will plough almost £19 billion a year back into the economy.”

Kwarteng also vowed to permanently keep the annual investment allowance, which gives 100% tax relief on investments in plant and machinery, at £1 million rather than drop it to £200,000 as planned.