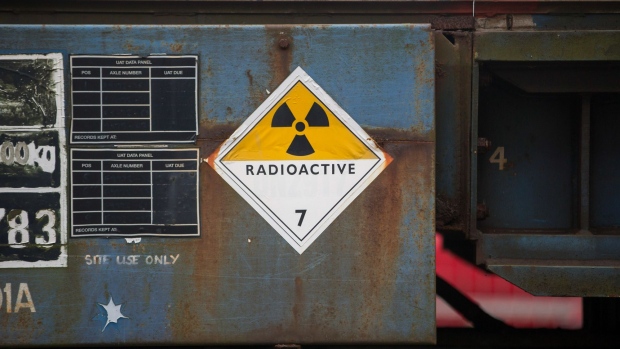 Kwasi Kwarteng, U.K. business secretary, departs following a weekly meeting of cabinet ministers at number 10 Downing Street in London, U.K., on Tuesday, April 19, 2022. U.K. Prime Minister Boris Johnson is expected to apologize to Parliament after receiving a fine for breaking pandemic lockdown rules, as he tries to draw a line under “partygate” even as he faces the risk of further penalties. , Bloomberg

(Bloomberg) -- The UK government is giving £120 million ($147 million) to a new fund for the development of nuclear power as the country seeks to put atomic energy at the heart of its electricity mix.

The Future Nuclear Enabling Fund will help the government meet its goal of approving eight new reactors by 2030, as committed to in its energy security strategy last month, according to a statement published Friday. The fund aims to encourage private investment in U.K. projects.

The “fund will push forward our plan to deploy a new fleet of nuclear power stations as part of a British nuclear renaissance,” said Kwasi Kwarteng, the U.K.’s secretary of state for energy.

Under Prime Minister Boris Johnson’s new plan, nuclear will provide 25% of the country’s power in three decades, up from 16% at present. But it’s not the first time the U.K. has tried to revive its nuclear industry: efforts have been underway since the 1980s under different governments. But just one plant is being built -- Hinkley Point C.

The size of the fund is small compared with what’s needed to make the government’s vision a reality. Electricite de France SA’s Sizewell C project on the English coast will cost about £20 billion, of which the UK has pledged £1.7 billion.

The biggest hurdle for new nuclear is financing. To help overcome that, the new fund will provide grants that will help nuclear construction projects, including small modular reactors, to attract the private investment they need to help make them a reality.