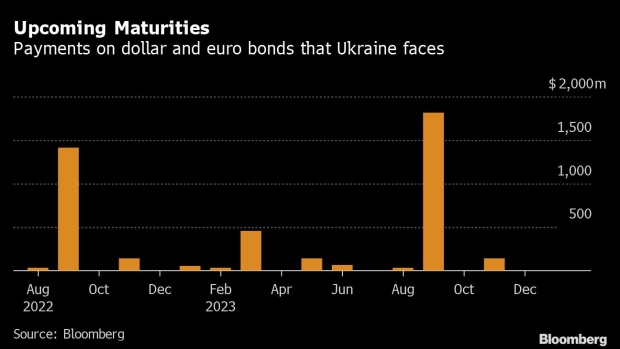 (Bloomberg) -- Ukrainian officials are exploring the possibility of debt restructuring as the war-ravaged country’s funding options are at risk of running out, according to three people familiar with the discussions.

Multiple scenarios are being considered and no decision is expected until later in the summer, according to two of the people, all of whom asked not to be identified because the talks are private. Ukraine has time until at least Sept. 1, when it faces a $1.4 billion redemption and interest payments, according to Bloomberg calculations.

Policy makers in Kyiv are struggling to keep the budget running as the country’s military fends off Russia’s invasion, which has destroyed cities, brought the nation’s key grain exports to a standstill, and displaced more than 10 million people.

The International Monetary Fund is offering advice and analysis about Ukraine’s financial and debt situation, according to two of the people. One of the options that Ukraine is considering involves a so-called consent solicitation, a request from the issuer for bondholder approval to amend the terms of the securities issued, according to the people. Another includes using Russia’s frozen assets as collateral, though the legal viability of such an idea is unclear, they said.

IMF staff have been engaging with the Ukrainian authorities since the invasion began in late February and continue to do so, a fund spokesman said, without commenting directly on questions regarding the possibility of debt restructuring.

The IMF in early March approved a $1.4 billion emergency loan for Ukraine, canceling the nation’s existing stand-by arrangement with the fund, which had $2.2 billion remaining to pay out from an original $5 billion authorized in 2020.

The negotiations underscore the Ukrainian government’s aim to remain on good terms with global investors, particularly to be in position to fund the country’s reconstruction after the war. For issuers, missing payments on international bonds would risk losing access to global debt markets for years.

Restructuring Ukraine’s bonds as a way of lowering its debt burden would help ensure that financing from major allies on defense and humanitarian aid aren’t channeled to repay bondholders.

Ukraine’s dollar and euro bonds trade below levels indicating distress and restructuring risk. The bonds due in September trade with more than 40% of discount to their face value, according to data compiled by Bloomberg.

Still, the Ukrainian government has said it is committed to servicing its foreign-debt obligations.

More than four months after Russia invaded Ukraine, spurring massive fighting that has left thousands of dead and a quarter of Ukraine’s population displaced from their homes, the country’s budget is coming under strain as its main funder -- Ukraine’s central bank --  raises the alarm about the limits of its ability to buy sovereign debt. The economic fallout has brought funding for everything from pensions to military operations under strain.

The central bank estimates Ukraine’s economy may shrink at least 30% this year, with the hryvnia being under increasing pressure. The monetary authority hiked its key interest rate to 25% from 10% at its last meeting on June 3 to support the currency.

Understanding the Roots of Russia’s War in Ukraine: QuickTake