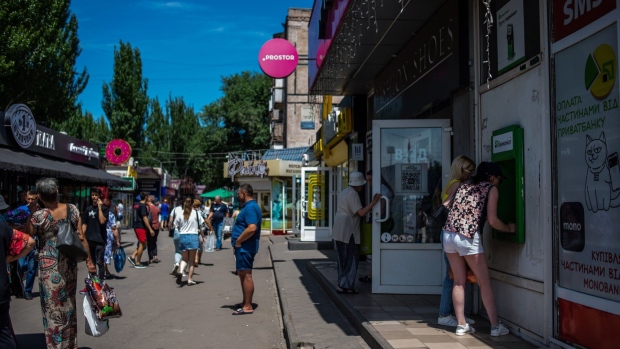 (Bloomberg) -- Ukraine was downgraded to default scores by both S&P Global Ratings and Fitch Ratings after the majority of the country’s bondholders agreed to defer debt payments for two years.

The war-torn nation’s foreign-currency rating was lowered to “selective default” -- or SD -- from CC by S&P on Friday. Fitch followed shortly after with a downgrade of its own, cutting Ukraine to “restricted default” -- or RD -- from C. The moves follows the approval of a debt-restructuring plan that could save Ukraine about $5.8 billion.

“We view the transaction as distressed and tantamount to default,” S&P said in a statement. “Ukraine’s debt restructuring comes amid significant macroeconomic, external, and fiscal pressures emanating from the war.”

Fitch echoed that the debt delay constitutes a distressed-debt exchange.  In addition to downgrading the nation’s broader foreign rating, however, Fitch did upgrade, to CCC-, local-law foreign-currency issuance due in 2023 that was not included in the exchange

Investors representing around 75% of $19.6 billion worth of the country’s foreign bonds agreed to defer coupon and principal payments until 2024, officials announced on Wednesday. An overwhelming majority of bondholders also approved a request to amend the terms of payments on so-called GDP warrants, which are linked to the country’s economic growth.

The process has been backed by the International Monetary Fund and many of Ukraine’s key supporters, including the US, as the country needs cash for everything from paying pensions to defending against a much bigger and richer aggressor.

S&P said Friday it would expect to raise its long-term foreign-currency rating on Ukraine after the restructuring is implemented and the altered bond terms take effect. The firm has a negative outlook on the nation’s local-currency rating as well due to “war-induced macroeconomic and fiscal stress.”