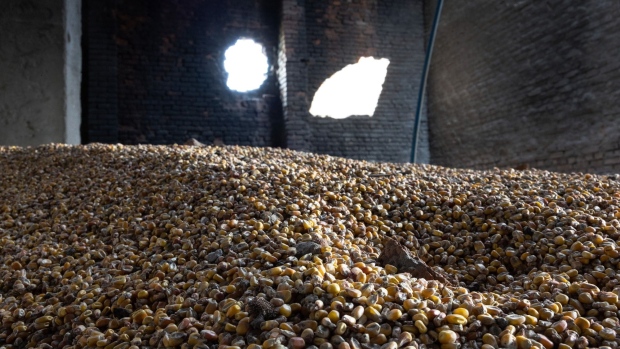 CHERKSKA LOZOVA, UKRAINE - MAY 14: Corn lies scattered in a grain warehouse damaged by Russian tanks on May 14, 2022 in Cherkska Lozova, Ukraine. He said that Russian forces had destroyed the warehouse and farm equipment while occupying territory outside of Kharkiv. Ukrainian and Western officials say Russia is withdrawing forces around Kharkiv, Ukraine's second-largest city, suggesting it may redirect troops to Ukraine's southeast. (Photo by John Moore/Getty Images) , Photographer: John Moore/Getty Images Europe

OT Logistics SA said its port facilities in Swinoujscie and Gdynia on the Baltic coast are already operating at full capacity. Some clients are also pre-paying to dock their ships in the future. The company estimates the capacity of its Baltic terminals at about 1.6 million tons monthly.

About 80% of Ukraine’s grain exports will need to go through Poland due to the war, making the European Union member the key transport nation for one of the world’s biggest agriculture exporters, Ukraine’s ambassador to Warsaw, Andrii Deshchytsia, told daily Puls Biznesu. Besides troubles with different gauges of railroad tracks on the Polish-Ukrainian border, there’s also the issue of having enough capacity to ship the grains to third countries from Baltic Sea ports.

“We are now facing the need to transport about 25 million tonnes of agricultural produce from Ukraine,” deputy Chief Executive Officer Kamil Jedynak said on Tuesday. “Poland has no capacity for such amounts, both in ports, and at railway terminals near borders.”

The surge in wheat prices sparked by the war in Ukraine prompted European leaders in Davos on Tuesday to accuse Russian President Vladimir Putin of trying to weaponize food security. Polish President Andrzej Duda warned of potential civil unrest in North Africa unless Ukraine is able to export its grains.

OT Logistics is working with governments to facilitate Ukrainian grain shipments. The company is also facing increased demand for port services from clients seeking to replace blocked deliveries of iron ore from Ukraine and coal from Russia, with other overseas supplies.

The Szczecin, Poland-based company is considering new investments in expanding its ports, but its legacy of high debt and a legal conflict with Allianz SE’s funds over a stake in Croatian port are making it cautious. It wants to reach long-term deals with Ukrainian suppliers and is waiting for the government to finalize plans for grain and coal transport routes.

“We are helping Ukrainian clients as we can, as they rush to reduce storage before harvests,” Jedynak said. “But market has changed completely.”