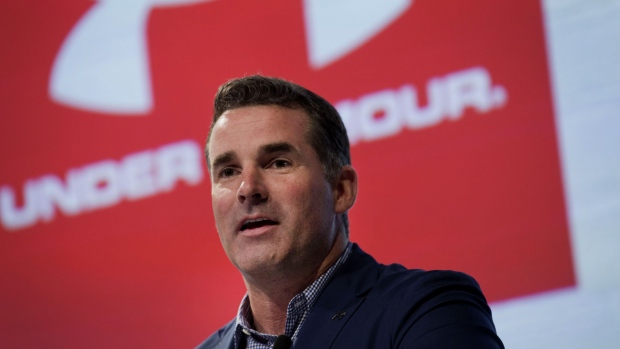 Under Armour Inc. said a pair of top executives, including founder Kevin Plank, has been named in a federal probe of the company’s accounting, sending shares of the athleticwear maker down.

Plank and Chief Financial Officer David Bergman received Wells Notices informing them that the U.S. Securities and Exchange Commission is likely to “allege certain violations of the federal securities laws,” Under Armour said Monday in a regulatory filing. Under Armour also received a notice informing it that the agency may file an enforcement action against the company.

The disclosure expands upon comments from the company in November, when it revealed that it had been under federal investigation for more than two years. The situation has roiled the Baltimore-based company as it has grappled with lackluster sales amid the coronavirus pandemic and a CEO change, with Plank handing the reins to Patrik Frisk earlier this year.

Under Armour and the executives “maintain that their actions were appropriate,” according to the latest filing. They intend to respond to the Wells Notices and “engage in a dialogue” with the SEC to resolve the matter.

The Wells Notices, which the SEC uses to inform investigation subjects that it intends to bring enforcement actions against them, relate to sales that were allegedly pulled forward during a period from the third quarter of 2015 through the end of 2016, Under Armour said. The SEC is “focused on the company’s disclosures regarding the use of pull-forward sales in order to meet sales objectives,” but it is not alleging revenue recognition violations, the company said.