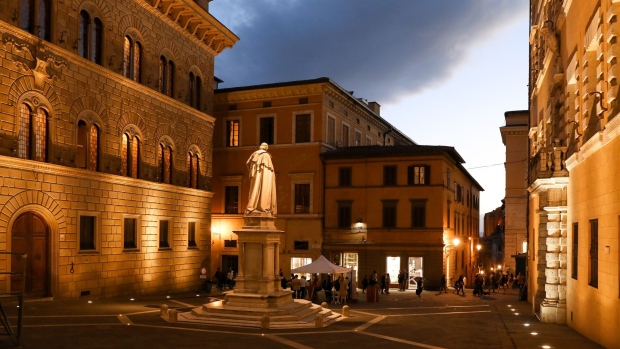 The statue of Sallustio Bandini, an economist and politician, stands in Piazza Salimbeni in front of Banca Monte dei Paschi di Siena SpA bank headquarters in Siena, Italy, on Sunday, Sept. 19, 2021. After more than 500 years as a pillar of prosperity in the hills of Tuscany and a decade or so as a byword for dysfunction, Banca Monte dei Paschi di Siena SpA appears to be entering the final chapter of its history. Photographer: Alessia Pierdomenico/Bloomberg , Bloomberg

(Bloomberg) -- Talks between UniCredit SpA and Italy’s Treasury over the purchase of Banca Monte dei Paschi di Siena SpA ended without a deal, according to a joint statement published on Sunday.

“Despite the effort from both sides, UniCredit and the Ministry of Economy and Finance announce that the negotiations pertaining to the potential acquisition of a defined perimeter of Banca Monte dei Paschi di Siena will no longer continue,” the statement said.

Bloomberg News reported earlier on Sunday that talks broke down because the two parties couldn’t find an agreement over the size of a capital injection and the businesses that UniCredit would take on as part of the deal, people with knowledge of the matter said. The Milan-based lender and the Treasury had been originally aiming to announce the outline of a deal by Thursday.