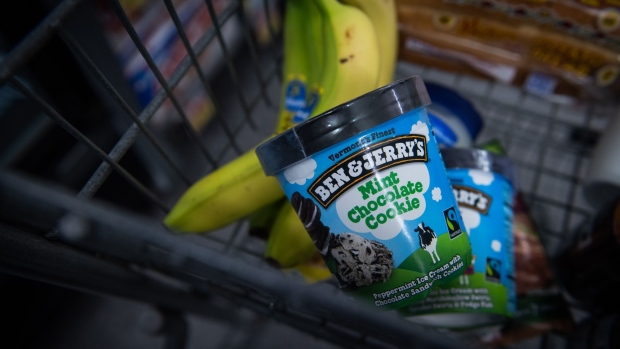 A pint of Unilever brand Ben & Jerry's ice cream arranged at a store in Dobbs Ferry, New York, U.S., on Wednesday, Jan. 19, 2022. Unilever Plc would need just over 50% of shareholders to back the purchase of GlaxoSmithKline's consumer health unit, its biggest takeover attempt ever. Judging by the initial reaction, that might prove a tough bar to clear. Photographer: Tiffany Hagler-Geard/Bloomberg , Bloomberg

Public reports will be issued on the performance of its products against at least six different government-endorsed measures, including the U.K.’s regulations against high fat, salt and sugar, and Europe’s Nutri-Score, Unilever said in a statement Monday. The assessment will be published annually -- starting in October -- both globally and for 16 key markets including the U.S., U.K. and China.

The move comes after a group of investors with $215 billion of assets under management, medical professionals and health campaigners in January filed a resolution calling on the consumer behemoth to set targets to increase the share of healthy products it sells. The resolution has now been withdrawn, Unilever said.

“A food manufacturer as large as Unilever has the power to improve the health of millions of people across the world,” said Catherine Howarth, chief executive officer of ShareAction, the shareholder group that pressed Unilever on the changes. “The transparency promised sets a new standard for the industry. We hope and expect that others will follow,” she said.

Unilever published nutrition targets in late 2020, including goals for plant-based food sales, the reduction of salt, sugar and calories, and increased sales of healthier “positive nutrition” foods. It plans to update and strengthen its specific targets that expire at the end of 2022, according to the statement said.

“I am confident that with these new initiatives, we will set a new benchmark for nutrition transparency in our industry and accelerate our positive impact on public health,” said Hanneke Faber, Unilever’s president of foods and refreshment.