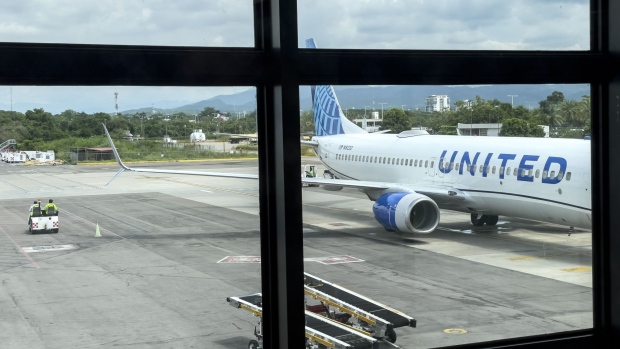 A United Airlines airplane on the tarmac at Licenciado Gustavo Diaz Ordaz International Airport (PVR) in Puerto Vallarta, Jalisco state, Mexico, on Saturday, Oct. 1, 2022. Mexico registered the arrival of 13 million 757 thousand international tourists by air to Mexico from January to August 2022, an increase of 64.7 % compared to the same period in 2021. Photographer: Cesar Rodriguez/Bloomberg , Bloomberg

(Bloomberg) -- United Airlines Holdings Inc. is planning to restart Hong Kong flights as soon as January, according to people familiar to the matter, becoming one of a handful of major airlines to resume passenger flights to the city, which has largely been cut off to the outside world since the start of the pandemic.

The Chicago-based carrier is evaluating plans to relaunch services from San Francisco in the new year, the people said, declining to be identified because the discussions are private.

The deliberations come after Hong Kong last month axed mandatory hotel quarantine for inbound travelers, bringing to an end more than two-and-half-years of restrictions that left the once thriving Asian hub bereft of tourists. At the height of the pandemic, mandatory quarantine stretched to three weeks, and for a significant time entry was limited to Hong Kong residents only.

Read more: Hong Kong Flights Are Hard to Come by Even With Quarantine Gone

Throughout the pandemic, Cathay Pacific Airways Ltd. has been the only airline with non-stop flights between Hong Kong and the US. Once United resumes flights, it will be the sole US carrier flying to Hong Kong after American Airlines Group Inc. permanently suspended its routes from Dallas and Los Angeles.

United suspended passenger flights to Hong Kong on Feb. 8, 2020, and apart from a brief resumption in July 2020 that lasted just one day, has mostly flown cargo-only flights in and out of the city.

Koji Nagata, a United Airlines spokesman, said the carrier is “currently evaluating the market demand and operating environment to determine when it’s right for us to resume flight operations to Hong Kong.”

A handful of foreign carriers announced increases in services to Hong Kong in recent weeks, including Singapore Airlines Ltd., which is increasing flights to three times daily from two starting at the end of October, and All Nippon Airways Co., which will add Tokyo Haneda services to complement its Narita links to Hong Kong.

British Airways Plc two weeks ago confirmed the resumption of flights in December after frequently pushing back its relaunch over the past few months.