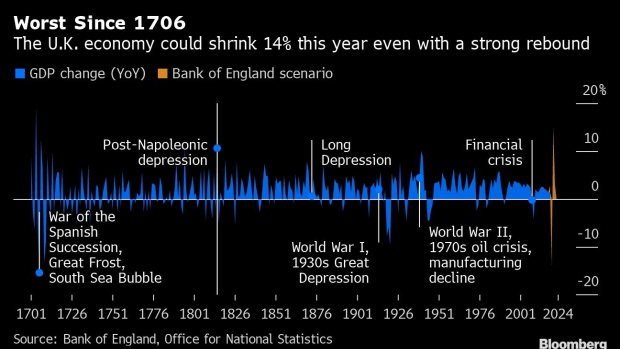 Tower Bridge stands in this view frame by a window on an empty bus traveling through the City of London, U.K., on Friday, May 29, 2020. For the last 11 weeks, Europe's financial center has been staffed with skeleton crews, particularly on the high-speed trading desks that are difficult to run from home. Photographer: Hollie Adams/Bloomberg , Bloomberg

(Bloomberg) -- The U.K. should introduce a universal basic income to get cash to struggling Britons along with a raft of other measures, according to proposals by the Royal Society for Arts.

The government should initially pilot a 2,500 pound ($3,000) direct cash payment through the existing tax infrastructure, the RSA’s Future Work Centre said in a report published Wednesday. This could be expanded to a 5,000-pound universal basic income over time and combined with other benefits, it said.

Britain’s economy is reeling from months of coronavirus restrictions that have shuttered businesses and kept people away from their workplaces. Government pandemic programs are now supporting 11.5 million jobs at a cost of 27 billion pounds, prompting questions about what will happen if they are withdrawn without significant new interventions.

“Tackling economic insecurity is essential to securing Britain’s recovery,” said Alan Lockey, head of the RSA Future Work Centre. “The conversation about how we build a better future beyond the pandemic must begin now. We need to be bold.”

“A look at the last seven downturns suggests the economy has often been left scarred with permanent damage especially evident after deeper troughs. That bodes ill for the current recession.”

Workers in struggling industries such as tourism and retail should be retrained by union-led bodies, the report said.

“Portable benefits” would help those in the gig economy, allowing them access to benefits such as sick pay and pensions that could be carried between employers.