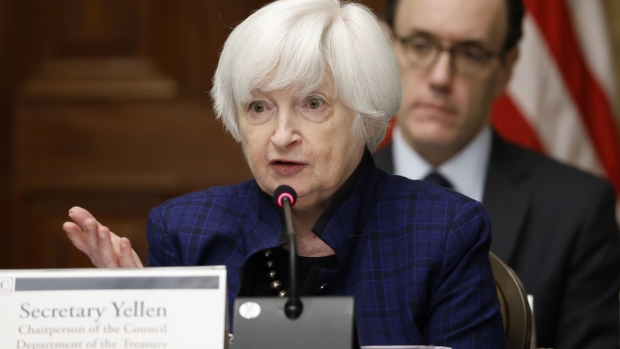 (Bloomberg) -- The US and the European Union are discussing a possible deal on minerals and critical raw materials in a bid to allow the EU to qualify for benefits in President Joe Biden’s massive new green investment plan, according to people familiar with the matter.

The Inflation Reduction Act, which includes roughly $500 billion in new spending and tax breaks over a decade to promote US manufacturing and services, offers certain exceptions for countries that have free-trade agreements with the US. A deal on key materials used in electric vehicles and batteries could allow the EU to access some of those advantages, said the people.

The law’s focus on spurring American industry angered trade partners from Asia and Europe who saw it cutting them out of the US market, particularly for automobiles. The US Treasury Department late last year signaled that some benefits could go to nations with trade agreements with Washington, which the EU doesn’t already have. Secretary Janet Yellen said in an interview published earlier this week that the issue could be resolved with new deals related to minerals.

“There could be some agreement that has to do with trade in minerals and critical minerals and so forth,” Yellen told the Wall Street Journal. “If countries signed up for it, we could find that something like that could qualify in the future as a free-trade area. We’re thinking along those lines.”

The new US legislation offers consumers a tax credit up to $7,500 for electric vehicles assembled in North America as long as the value of the raw materials in their batteries that are extracted or processed in the US, or in countries that have a free-trade agreement with Washington, is at least 40%. That means some US partners — such as Canada and Mexico — can meet the law’s content requirements, while other foreign car producers can’t.

Discussions between the EU and US are at an early stage, said the people, who asked not to be identified because the talks are private. The European Commission wasn’t able to immediately comment. The White House’s National Security Council said in a statement that “we are committed to continuing to understand our partners’ concerns,” without commenting directly on the talks.

Any agreement on minerals and raw materials, which is broadly aimed at reducing reliance on supplies from China, could also involve other nations, the people said, including potentially Indonesia and Argentina. The Biden administration is also considering whether to count the US-led Indo-Pacific Economic Framework, which includes Japan and South Korea, as an agreement that would allow participating countries to benefit from the new law.

The US is likely to only want to focus on extraction and processing critical minerals used in the vehicles, the people said, while the EU wants any arrangement to also include recycled materials.

The EU and the US have set up a task force to try and bridge some of those differences, but officials are skeptical that a wholesale fix can be found.

The new law “incentivises the relocation of industry to the US, thereby potentially putting the EU industrial base for clean technologies at a disadvantage,” European Commissioners Valdis Dombrovskis, Frans Timmermans and Margrethe Vestager wrote in the Financial Times on Thursday. “We need to see more progress in our talks with the US to remove these risks.”

The EU is working on a broader response to the act that will likely allow for more national investment in domestic companies; reforming how existing EU funds are deployed; and possibly fresh financing to make sure every country in the bloc has the ability to keep their companies competitive. EU leaders will meet in Brussels on Feb. 9-10 to discuss the proposals.

“We need to improve the refining, processing and recycling of raw materials here in Europe,” European Commission President Ursula von der Leyen said at the World Economic Forum in Davos last week. “And in parallel, we will work with our trade partners to cooperate on sourcing, production and processing to overcome the existing monopoly.”

“To do this, we can build a critical raw materials club working with like-minded partners – from the US to Ukraine – to collectively strengthen supply chains and to diversify away from single suppliers,” she said.

(Updates with European Commission on the final page.)