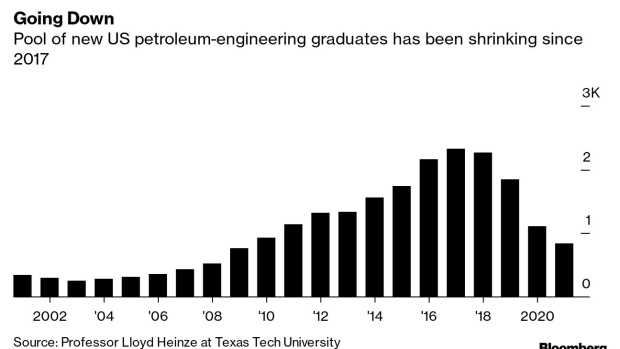 But after recently graduating with honors from the University of Texas at Austin with a petroleum-engineering degree, Lindberg is turning his back on the oil industry and plans to attend law school instead. His disenchantment is rooted in concern that fossil fuels may not have much of a future given increasing pressure from politicians, activists and investors to pivot toward more climate-friendly energy sources.

The 22-year-old Houston-area native illustrates an alarming trend for the top US petroleum-engineering programs, where enrollments are dwindling despite the surge in crude prices that historically prompted more aspirants to join the industry.

This year, the number of new petroleum-engineering graduates in the US is expected to total about 400 -- an 83% decline from 2017, when they peaked at more than 2,300, according to Lloyd Heinze, a Texas Tech University professor who tracks annual enrollments at more than three dozen petroleum schools around the world.

“I was kind of concerned that if we eventually get to a point where fossil fuels are so disfavored that the jobs simply don’t exist before I plan to retire,” Lindberg said. “I could lose my career if I stayed.”

At Lindberg’s alma mater -- which he attended on a full scholarship -- undergraduate enrollment in petroleum engineering dropped 11% between 2018 and 2021. Although benchmark American crude prices climbed 25% during that period, it was perhaps the most-volatile era in the modern oil industry: in early 2020, the price temporarily went negative for the first time in history as energy demand collapsed in the wake of a worsening global pandemic.

Historically, however, petroleum schools have seen influxes of new students when oil booms and the sector goes on hiring sprees. But with US crude up more than 30% so far this year, the link appears to be broken.

“Personally, I think we are heading to a bit of a crisis,” said Jennifer Miskimins, who leads the petroleum-engineering department at the Colorado School of Mines, one of the world’s premier oil universities. “As petroleum engineers age, the industry will need to replace a retiring cohort of Baby Boomers. But we are not seeing enough petroleum engineers to fill the demand.”

During the shale revolution that unfolded during the first decade-and-a-half of this century, enrollments soared and bachelor’s degrees reached a record 2,326 in 2017, Texas Tech’s Heinze said. That will tumble to about 400 this year and remain in the 200-to-400 range annually for the next 10 years or so, he estimated.

The reason why enrollment numbers no longer correlate with oil prices, according to Colorado School of Mines’s Miskimins, is partly due to the energy transition. More students and parents are turned off by the sector not necessarily because they are environmental advocates, but because they have concluded the switch will make oil and natural gas obsolete in five or 10 years, she said.

To cope with falling petroleum-engineering enrollments, universities across the country are trying to adapt. For example, the University of Texas is offering a new minor in sustainable energy where students can take a wide array of environmentally-minded classes.

And many students that matriculate with petroleum-engineering degrees are putting those skills to work in non-oil fields, said Jon E. Olson, the department chair of petroleum and geosystems engineering at UT. Roughly 25 of the 75 companies that hired graduates of the department’s class of 2020 were involved in the tech, financial, environmental and consulting sectors, he said.

“We always tell students in their first lesson, you are entering a super cyclical industry, and you need to be prepared for that,” Miskimins said.