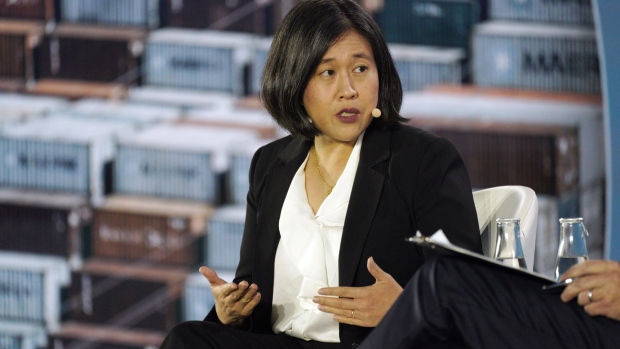 (Bloomberg) -- The US and European Union are weighing new tariffs on Chinese steel and aluminum as part of a bid to fight carbon emissions and global overcapacity, according to people familiar with the matter.

The move would mark a novel approach, as the US and EU would seek to use tariffs -- usually employed in trade disputes -- to further their climate agenda. US aluminum and steel producers climbed in extended trading, while in Hong Kong, Aluminum Corp. of China and China Hongqiao Group Ltd. slipped.

The idea, generated within President Joe Biden’s administration, is still in an initial phase and hasn’t been formally proposed, according to the people, who asked not to be identified as the discussions aren’t public. An agreement with the EU, including specifics on how to identify thresholds for applying tariffs, isn’t likely until late next year at the earliest, one of the people said, adding that even that timeline was optimistic.

The new framework, which builds on a related US-EU agreement last year, is mainly aimed at China, the world’s biggest carbon emitter and producer of steel and aluminum, as well as other large polluting nations, according to the people.

The tariff plan would likely deepen divisions between Beijing and Washington, particularly at a time when the two countries have committed to working together to fight climate change. But talks between the US and EU to jointly address the climate crisis are a positive sign for a relationship that’s again suffering trade irritants, including Biden’s signature climate law that European countries say discriminates against their industries.

Other countries have expressed interest in joining the talks, but the new framework would likely not include them at first. That could mean steel and aluminum imports from Japan and others risk being targeted by new duties. The goal, however, is to open the deal to other countries as quickly as possible, as long as they can meet the agreement’s ambitions, one person familiar with the plans said.

It’s unclear what legal authority the Biden administration would use to implement new tariffs. A person familiar with the matter said that question is still being worked out internally and in talks with the EU, as well as with industry representatives and Congress. The White House is also talking to lawmakers about potential new authorities, the person added.

US Trade Representative Katherine Tai and her team presented the idea to European Commissioner Valdis Dombrovskis and others in Prague in late October. EU officials raised several questions at the time, including regarding the legality and compatibility with WTO rules, as well as with the bloc’s internal carbon pricing mechanism, people familiar with the talks said.

USTR General Counsel Greta Peisch gave the US presentation in Prague and is leading the charge from Washington, one person said. A USTR spokesman declined to comment.

The climate-focused trade effort by the US and EU was first raised in October 2021, when the two sides resolved a key dispute over steel and aluminum tariffs that had been imposed by former President Donald Trump on national security grounds.

One approach for the potential new tariffs may be to convert an existing investigation under Section 232 of the Trade Expansion Act -- which served as the underlying rationale for Trump’s duties on European steel and aluminum in 2018 -- into a new inquiry that targets carbon emissions and overcapacity. That would give the White House legal cover to move forward without having to wait for a new probe to conclude, according to another person.

US officials are also still deliberating the tariff rate, or band of tariff rates that would be applied to other countries, and the US has told EU officials that they’d like the agreement to be legally binding, the people said.

For the Biden administration, the first-of-its-kind agreement would be one element of what the White House describes as its worker-centric trade policy, as it focuses on defending key industries and their workers, both in the US and in Europe.

--With assistance from Lucille Liu and Philip Glamann.