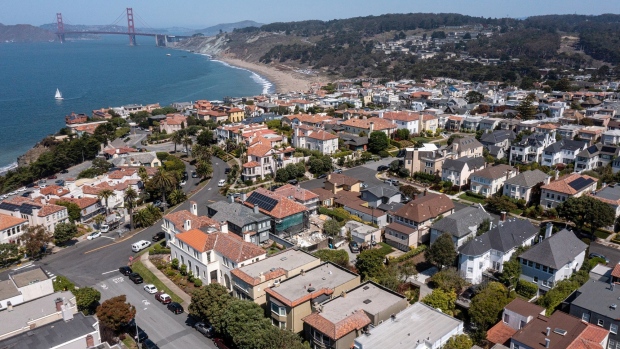 Residential homes in San Francisco, California, US, on Thursday, Sept. 8, 2022. San Francisco home prices tumbled last month as soaring interest rates and an exodus of tech workers battered demand in one of the most expensive US housing markets. , Bloomberg

(Bloomberg) -- US mortgage rates jumped to a 16-year high of 6.75%, marking the seventh-straight weekly increase and spurring the worst slump in home loan applications since the depths of the pandemic.

The contract rate on a 30-year fixed mortgage rose nearly a quarter percentage point in the last week of September, according to Mortgage Bankers Association data released Wednesday. The steady string of increases in mortgage rates resulted in a more than 14% slump last week in applications to purchase or refinance a home.

Over the past seven weeks, mortgage rates have soared 1.30 percentage points, the largest surge over a comparable period since 2003 and illustrating the abrupt upswing in borrowing costs as the Federal Reserve intensifies its inflation fight.

The effective 30-year fixed rate, which includes the effects of compounding, topped 7% in the period ended Sept. 30, also the highest since 2006.

Prospective homebuyers may soon experience some respite in the rapid upturn in borrowing costs given the US 10-year Treasury yield has eased so far this week.

Other measures of mortgage rates also put the cost of borrowing around 6.7%. Last week, Freddie Mac’s data, which is released on Thursdays, showed that the average for a 30-year loan climbed to 6.7%, the highest since 2007, in the week ended Sept. 29. Mortgage News Daily, which updates more frequently, puts the 30-year rate at 6.65% on Tuesday.

The MBA survey, which has been conducted weekly since 1990, uses responses from mortgage bankers, commercial banks and thrifts. The data covers more than 75% of all retail residential mortgage applications in the US.