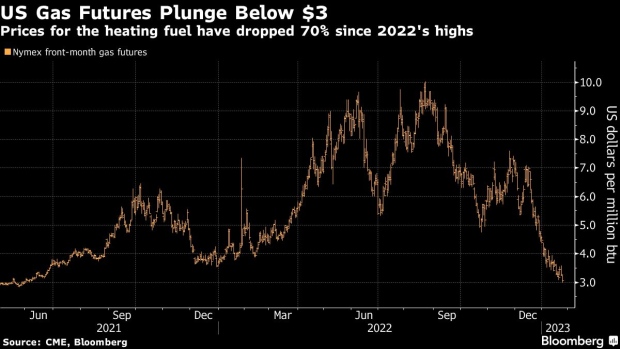 (Bloomberg) -- US natural gas futures extended losses below $3 amid mild winter weather that helped spark the worst selloff among the country’s commodities.

Gas for February delivery lost as much as 10% to $2.761 per million British thermal units Thursday on the New York Mercantile Exchange. Prices have been at the lowest levels since April 2021 after dipping below $3 on Wednesday.

Doomsday fears that suppliers wouldn’t be able to meet wintertime demand have been erased by a confluence of factors, leading gas prices to plunge more than 70% after hitting a 14-year high of $10.03 in August. The key reasons for the fall: The US and Europe managed to refill their buffer inventories ahead of winter and relatively balmy seasonal temperatures in the Northern Hemisphere have so far damped demand for heating.

The latest revisions to the weather forecast were “absolutely brutal,” indicating a looming cold shot in the US won’t last much and leading traders to bet on mostly mild February temperatures, said Gary Cunningham, director of market research at risk management firm Tradition Energy.

The premium typically commanded for gas delivered in March rather than April — essentially a bet on how tight supplies will be at winter’s end — has reversed to a discount.

“That alone tells you that traders have given up on winter,” Cunningham said. “The bears are ruling the market and the bulls have been chased into the shadows.”

The amount of gas stored in salt caverns and depleted aquifers fell by less than usual for a second straight week after an unprecedented increase earlier this month, and is now almost 5% above the average for the past five years, the Energy Information Administration said Thursday.

Also weighing on prices, the longer-than-expected shutdown of a Texas liquefaction terminal after an explosion in June has constrained US gas exports and thus boosted domestic supplies. The commodity trimmed some losses after a Thursday letter by the Federal Energy Regulatory Commission authorizing Freeport LNG, the terminal operator, to resume some activities before a full reopening.

Natural gas had been one of the most bullish commodity stories in recent years. Prices hit the August high amid a global supply crunch that was aggravated last year by Russia’s invasion of Ukraine.

--With assistance from Ann Koh and Stephen Stapczynski.