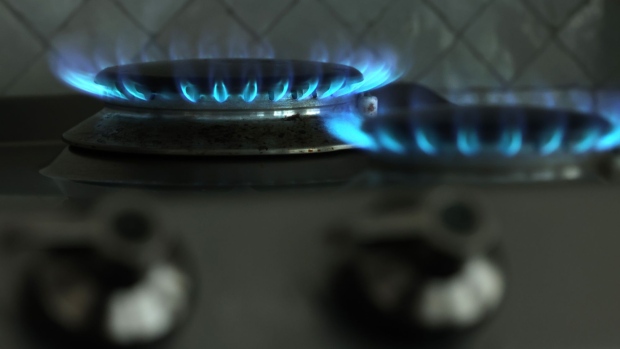 BERLIN, GERMANY - AUGUST 19: In this photo illustration a gas flame burns on a gas stove top on August 19, 2022 in Berlin, Germany. The German government, faced with skyrocketing prices for natural gas, is wrestling with policies designed to alleviate the hike in prices for consumers and businesses yet at the same time create a financial cushion for gas providers and utilities. Germany and other countries in Europe still import a significant portion of their gas from Russia. Russia has responded to western sanctions by significantly lowering the flow of its natural gas exports to western Europe. (Photo by Sean Gallup/Getty Images) , Photographer: Sean Gallup/Getty Images

(Bloomberg) -- A federal agency says a ban on gas stoves is on the table amid rising concern about harmful indoor air pollutants emitted by the appliances.

The US Consumer Product Safety Commission plans to take action to address the pollution, which can cause health and respiratory problems.

“This is a hidden hazard,” Richard Trumka Jr., an agency commissioner, said in an interview. “Any option is on the table. Products that can’t be made safe can be banned.”

Natural gas stoves, which are used in about 40% of homes in the US, emit air pollutants such as nitrogen dioxide, carbon monoxide and fine particulate matter at levels the EPA and World Health Organization have said are unsafe and linked to respiratory illness, cardiovascular problems, cancer, and other health conditions, according to reports by groups such as the Institute for Policy Integrity and the American Chemical Society. Consumer Reports, in October, urged consumers planning to buy a new range to consider going electric after tests conducted by the group found high levels of nitrogen oxide gases from gas stoves.

New peer-reviewed research published last month in the International Journal of Environmental Research and Public Health found that more than 12% of current childhood asthma cases in the US can be attributed to gas stove use.

“There is about 50 years of health studies showing that gas stoves are bad for our health, and the strongest evidence is on children and children’s asthma,” said Brady Seals, a manager in the carbon-free buildings program  at the nonprofit clean energy group RMI and a co-author of the study. “By having a gas connection, we are polluting the insides of our homes.”

The Bethesda, Maryland-based Consumer Product Safety Commission, which has a staff of roughly 500, plans to open public comment on hazards posed by gas stoves later this winter. Besides barring the manufacture or import of gas stoves, options include setting standards on emissions from the appliances, Trumka said.

Lawmakers have weighed in, asking the commission to consider requiring warning labels, range hoods and performance standards. In a letter to the agency in December, lawmakers including Senator Cory Booker of New Jersey and Representative Don Beyer of Virginia, both Democrats, urged action and called gas-stove emissions a “cumulative burden” on Black, Latino and low-income households that disproportionately experience air pollution.

Parallel efforts by state and local policymakers are targeting the use of natural gas in buildings more broadly, in a push to reduce climate-warming emissions (such as from methane) that exacerbate climate change. Nearly 100 cities and counties have adopted policies that require or encourage a move away from fossil fuel powered buildings. The New York City Council voted in 2021 to ban natural gas hookups in new buildings smaller than seven stories by the end of this year. The California Air Resources Board unanimously voted in September to ban the sale of natural gas-fired furnaces and water heaters by 2030.

Consumers who want to switch from gas to electric ranges could get some help from the massive climate spending bill signed into law in August. The Inflation Reduction Act includes rebates of up to $840 for the purchase of new electric ranges as part of some $4.5 billion in funding to help low- and moderate-income households electrify their homes.

The Association of Home Appliance Manufacturers, which represents gas range manufacturers such as Whirlpool Corp., says that cooking produces emissions and harmful byproducts no matter what kind of stove is used.

“Ventilation is really where this discussion should be, rather than banning one particular type of technology,” said Jill Notini, a vice president with the Washington-based trade group. “Banning one type of a cooking appliance is not going to address the concerns about overall indoor air quality. We may need some behavior change, we may need [people] to turn on their hoods when cooking.”

Natural gas distributors, whose business is threatened by the growing push to electrify homes, argue that a ban on natural gas stoves would drive up costs for homeowners and restaurants with little environmental gain. The American Gas Association, which represents utilities such as Dominion Energy Inc. and DTE Energy Co., said in a statement that regulatory and advisory agencies responsible for protecting residential consumer health and safety have presented no documented risks from gas stoves.

“The U.S. Consumer Product Safety Commission and EPA do not present gas ranges as a significant contributor to adverse air quality or health hazard in their technical or public information literature, guidance, or requirements,” said Karen Harbert, the group’s president. “The most practical, realistic way to achieve a sustainable future where energy is clean, as well as safe, reliable and affordable, is to ensure it includes natural gas and the infrastructure that transports it.”

“If the CPSC really wanted to do something about public health, it would ban cigarettes, or automobiles, long before it moved on to address stoves,” said Mike McKenna, a GOP energy lobbyist. “It’s transparently political.”

Trumka, who before joining the commission worked for a House committee in a role that included work on toxic heavy metals in baby food and the health hazards of e-cigarettes, said the commission could issue its proposal as soon as this year, though he conceded that would be “on the quick side.”

“There is this misconception that if you want to do fine-dining kind of cooking it has to be done on gas,” Trumka said. “It’s a carefully manicured myth.”