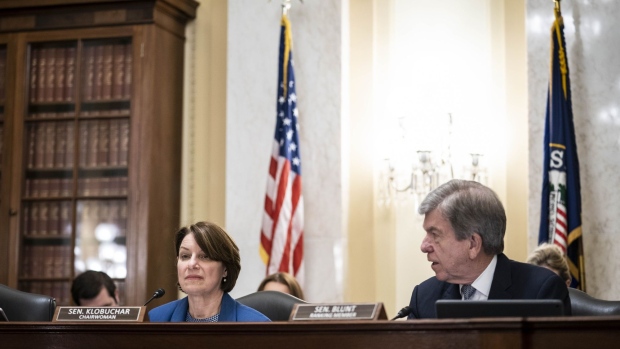 Senator Amy Klobuchar, a Democrat from Minnesota and chair of the Senate Rules and Administration Committee, speaks as ranking member Senator Roy Blunt, a Republican from Missouri, listens during a hearing in Washington, D.C., U.S., on Wednesday, June 16, 2021. Capitol Police were ill-prepared for the Jan. 6 insurrection because of deficiencies in leadership decision-making under fire, threat analysis and equipment and training, according to the department's top internal watchdog. , Bloomberg

(Bloomberg) -- Senate Republican leader Mitch McConnell threw his support Tuesday behind a bipartisan bill that would raise the bar for challenging presidential election results, boosting chances it will clear Congress this year.

The Senate bill, McConnell said, makes “modest” fixes to the process of counting electors and has a better chance of getting through Congress than a more expansive version passed by the House last week.

“I strongly support the modest changes that our colleagues in the working group have fleshed out after literally months of detailed discussions,” he said on the Senate floor. “I’ll proudly support the legislation, provided that nothing more than technical changes are made to its current form.”

The endorsement came shortly before the Senate Rules Committee approved the bill, which was spurred by Donald Trump’s false claims about the 2020 election and the ensuing attack on the US Capitol on Jan. 6, 2021.

While the House version of the bill passed with mostly Democratic support, under Senate rules the legislation requires at least 10 Republicans in the 50-50 chamber to pass. The full Senate isn’t expected to act on the bill until after the November congressional elections.

In a brisk 45-minute hearing, McConnell and other Republicans on the Rules Committee joined Democrats to approve the technical changes and the bill itself. Only Texas Senator Ted Cruz, who objected to Biden electors from Arizona and Pennsylvania on Jan. 6, voted against the bill in committee, arguing that it would make it harder for Congress to address voter fraud and would interfere with state administration of elections.

“What this bill is trying to do is take Congress out of the business of trying to correct fraud,” he said.

Both bills would greatly raise the number of representatives and senators needed to raise an objection to a state’s electors and force a vote, create a fast-track process to rein in governors who refuse to certify an election and strike vague language from the 1887 Electoral Count Act that Trump and his allies sought to exploit in order to delay or stop certification of President Joe Biden’s victory.

The House version goes further in several areas, including allowing judges to restrict local officials who refuse to certify an election.

That has become a concern in recent months as officials in a New Mexico county initially refused to certify the results of a primary while three Pennsylvania counties refused to count certain mail ballots until state and federal judges ordered them to do so. Local officials in Colorado, Georgia and other states are also under investigation for allowing unauthorized access to voting machines in attempts to prove fraud.

Minnesota Democratic Senator Amy Klobuchar, who chairs the Rules Committee, and Senator Roy Blunt of Missouri, the panel’s top Republican, made some changes to an earlier draft of the Senate bill in the hearing Tuesday, but they didn’t include the broader provisions from the House bill.

The Senate bill, originally sponsored by Senators Susan Collins, a Maine Republican, and Joe Manchin, a West Virginia Democrat, would fix some technical issues raised by civil rights groups and voting rights advocates in a previous hearing. Among other things, the revisions would clarify that the bill allows judges to compel a rogue governor to certify an election and that the judicial process does not pre-empt other litigation over election-related issues.

“The change just makes clear that the judicial review is not meant to displace any other legitimate litigation over an election,” said Holly Idelson, a policy advocate for Protect Democracy, a voting rights group.

Klobuchar and Blunt’s changes would also allow the Supreme Court to leave a judicial order to a rogue governor in place by declining to hear an appeal. Under the original Senate draft of the bill, the nation’s highest court was required to take up the case.

The changes would also spell out the circumstances under which voting in a state could be extended past Election Day to include “extraordinary and catastrophic” events such as a terrorist attack or a natural disaster and remove vague wording about a “failed election” included in the 1887 law that voting rights advocates fear could be abused by officials seeking to overturn a loss.

The changes would not affect the threshold in the Senate bill for Congress to get involved. The House bill has a higher standard for Congress to hold a vote objecting to a state’s electors, requiring one-third of both the House and the Senate to raise the question. The Senate bill requires only one-fifth of both chambers before a vote is held. The current law requires only one representative and one senator to force a vote.

“We need a bill and we need to move on it quickly in a bipartisan basis,” Illinois Senator Dick Durbin, the chamber’s No. 2 Democrat, said after McConnell’s endorsement.

Nearly a third of the House objected to the certification of Arizona and Pennsylvania’s electors in 2021, but only eight senators. There are an additional 11 Republican nominees for Senate on the ballot in November have either said the 2020 election was stolen or raised doubts about its legitimacy, according to a Bloomberg News review.