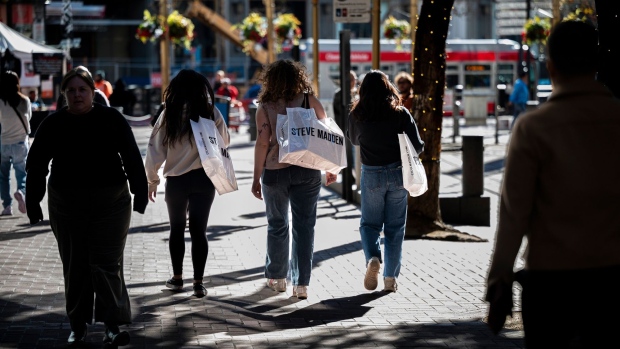 Shoppers on Powell Street in San Francisco, California, US, on Tuesday, Nov, 29, 2022. US retailers eked out modest growth over Black Friday weekend with deep discounts that lured shoppers seeking a reprieve from stubborn inflation. , Bloomberg

(Bloomberg) -- US short-term inflation expectations unexpectedly declined to the lowest level in more than a year and consumer sentiment picked up, helped by falling gasoline prices.

Consumers expect prices will climb at an annual rate of 4.6% over the next year, down from the 4.9% expected a month earlier, to the lowest since September 2021, according to the preliminary December reading from the University of Michigan. Long-term inflation expectations held at 3%.

The sentiment index increased to 59.1 from 56.8 last month, the data showed Friday. The median estimate in a Bloomberg survey of economists called for a reading of 57.

“Consumers’ concerns over high prices in a variety of contexts have eased somewhat over the last month — though these concerns still remain substantially higher than a year and a half ago — showing that the decline in year-ahead inflation expectations was not solely an artifact of current gas prices,” Joanne Hsu, director of the survey, said in a statement.

The pullback in inflation expectations was broad across demographic groups. Inflation has showed signs of easing in recent months — and is projected to slow further in fresh data out next week — but consumers still face historically high prices.

A separate report out Friday showed US producer prices rose in November by more than forecast, driven by services and underscoring the stickiness of inflationary pressures.

The university’s report showed the median expected change in incomes rose to the highest in 15 years, but half of all respondents said they expect inflation to outstrip those gains over the coming year.

As the Federal Reserve continues to raise interest rates, economic uncertainty that includes recession concerns is also weighing on sentiment.

The current conditions gauge increased to 60.2 from 58.8. A measure of expectations rose to 58.4 this month from 55.6 in November.

Buying conditions for durable goods improved, and consumers’ perception of the labor market was little changed.

“With the continued erosion of buying power of consumers, rapid increases in credit card and auto loan balances, and continued concerns over the high cost of borrowing, the strength in spending we have seen this year will be difficult to sustain,” Hsu said.