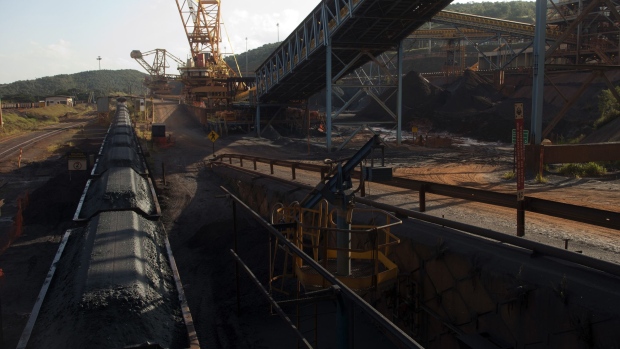 Crushed iron ore is transported in railroad cars, left, next to a conveyer belt at Vale SA's Brucutu mine in Barao de Cocais, Brazil. , James Attwood

(Bloomberg) -- One of the world’s biggest mining companies is getting into the construction business.

Vale SA is starting to extract sand from material left over from iron ore processing to supply civil construction projects in Brazil. At the same time, the Rio de Janeiro-based mining giant is developing a type of low-emission geopolymer cement that will use the mining-waste sand, said Rogerio Nogueira, head of ferrous marketing.

Vale’s so-called sustainable sand and green cement initiatives are part of the mining industry’s push to clean up its own operations and supply chains as the world battles to reduce greenhouse gas emissions. The plan is to spin off successful initiatives in a type of corporate venture capital, Nogueira said in an interview.

The cement project is still in development while the sand operation has begun with a modest 250,000 metric tons before ramping up to at least 1 million tons next year. Vale could potentially produce 50 million tons, which is about what is contained in its iron ore tailings. That compares with Brazil’s more than 300 million ton sand market and the global industry of about 40 billion tons, most of which comes from illegal dredging

“Sand is a critical commodity to the world and one that has a lot of impact on the environment because of river dredging,” Nogueira said.

Beyond cement and road pavement, Vale is looking at other uses for the sand such as ceramics. Universities in Australia and Switzerland are studying possible applications of sand made from mineral ores, using Vale’s as a case study.