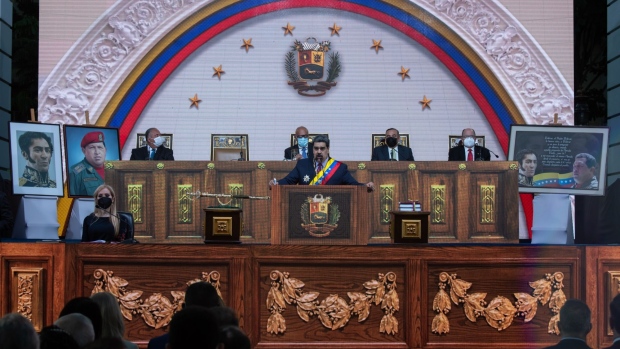 Nicolas Maduro, Venezuela's president, delivers a State of the Union address outside the National Assembly in Caracas, Venezuela, on Saturday, Jan. 15, 2022. Maduro delivers his annual address on the heels of suffering a rare electoral loss in Barinas state, the birthplace of Hugo Chavez. , Bloomberg

(Bloomberg) -- Venezuela probably grew 4% in 2021, signaling an “economic recovery” in 2022, President Nicolas Maduro said in his annual state of the union speech, maintaining his firm grip for a ninth year on a mandate considered illegitimate by the opposition, the U.S. and several European countries.

“I can state that Venezuela, after five years of economic warfare, has returned to the path of economic growth,” Maduro said before the socialist party-led National Assembly, revealing key economic data that the government has withheld since 2019. The last available figure from the Central Bank dates back to the first quarter of that year, when the economy plunged almost 24%.

The nation grew 7.6% in the third quarter of 2021, Maduro added. “It’s a wonderful achievement for our country.”

The latest growth figures portend to a slight turnaround in an economy that has seen one of the deepest collapses in the modern world since 2013. Years of misguided policies and rampant corruption made the economy ill-prepared to face external challenges. The country spiraled into hyperinflation, decimating the currency’s value and driving the population to unseen levels of poverty.

Maduro also celebrated inflation numbers posted last year. Inflation in December was 7.6%, marking 12 straight months below the hyperinflation threshold of 50%, according to Central Bank data. “We are optimistic about overcoming the hyperinflation burden,” he said.

Investment grew 3.1% and non-oil exports expanded 4.9%, he said. Public and private banking systems should aim to boost entrepreneurship with expansion of credit, and he set an oil output target at 2 million barrels a day. That’s twice what PDVSA planned for the end of 2021.

“We have gone from a stage of tough resistance to a stage of recovery,” he said. “We must move toward a stage of flourishing and sustainable growth.”

Maduro also said the U.S. and Colombia’s plan for a “parallel government” failed, alluding to efforts led by opposition leader Juan Guaido and his interim presidency. Maduro vowed to restart negotiations with the opposition in Mexico, which the government suspended after accusing the U.S. government of “kidnapping” his business ally, Alex Saab.