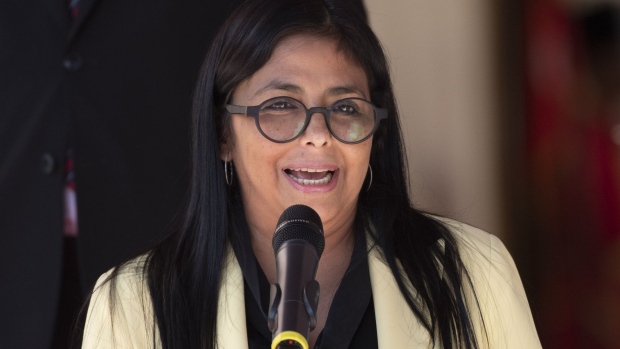 (Bloomberg) -- Venezuela’s new finance minister offered a proposal to holders of defaulted bonds that she says will pave the way for an eventual restructuring.

Delcy Rodriguez, appointed to the post last week, said her government will waive a statute of limitations clause in some bonds’ prospectuses if creditors agree not to sue for non-payment or to not proceed with claims if a suit has already been filed. Reaching an agreement now will allow for a smoother restructuring in the future, Rodriguez said.

Some investors have disputed the limitations’ validity, and it isn’t clear what appeal the offer may hold. The country has defaulted on $60 billion of sovereign and corporate debt over the past three years amid an economic collapse and U.S. sanctions that limit negotiations with the government and forbid Venezuela from undertaking a restructuring that includes issuing new bonds.

But Rodriguez’s offer may carry some symbolic significance by indicating that President Nicolas Maduro’s administration still wants to reach an accord with bondholders. It had been months since top officials had even mentioned the arrears, and most of the debt now trades at just pennies on the dollar.

The idea “does not make much sense within the framework of U.S. sanctions,” said Asdrubal Oliveros, a director at the Caracas-based research firm Ecoanalitica. “Under Venezuela’s current conditions, with a 75% drop in its dollar revenue this year, the country will hardly have the ability to enter a cycle of debt restructuring.”

The ultimate motive may be trying to get U.S. investors to push the Trump administration to loosen the sanctions that have crippled Venezuela and left it locked out of mainstream financial markets, according to Ray Zucaro of RVX Asset Management LLC in Miami, which owns the bonds.

“Are you familiar with the expression ‘with a grain of salt?’ In this example, I would say like 10 kilos of salt,” Zucaro said in an interview. “It’s a no-brainer: They’re trying to get foreign creditors to lobby on their behalf.”

The proposal covers 29 bonds issued by the government, the state oil company and the state electricity company, according to a statement from the Finance Ministry. Investors have until Oct. 13 to respond and must suspend all existing claims in international courts, Rodriguez said. The deal only stands if bondholders who own more than 75% of the existing debt accept the offer.

“We are announcing a conditional offer to interrupt certain entities to avoid investors from being affected,” Rodriguez said in her first public appearance as finance minister since her appointment.

In September 2019, Venezuela’s government said it was ready to resume negotiations with foreign investors, but not much came of it. Sanctions effectively prevent U.S. persons from discussing financial deals with targeted officials, including Maduro, Rodriguez, and Economy Vice President Tareck El Aissami. They also preclude Venezuela from issuing new international bonds, which usually happens as part of restructurings.

Elsewhere in Latin America, Argentina and Ecuador recently completed bond restructurings after reaching agreements with creditors in the midst of the pandemic.

While U.S. restrictions also prevent Venezuela from paying its debt through traditional means, Maduro has said his government has alternatives to circumvent the rules, including using cryptocurrencies.

Petroleos de Venezuela notes due in 2022 were quoted near 3.19 cents on the dollar Tuesday, near a three-month high. The company defaulted on those bonds in March 2018.