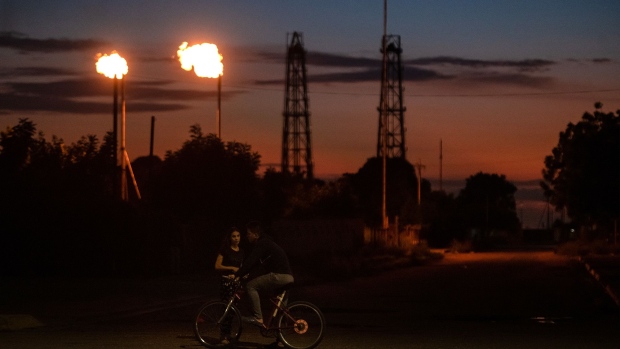 (Bloomberg) -- Venezuela’s government and opposition agreed to restart talks this weekend, ending a yearlong standoff and potentially opening the door for the US to ease oil sanctions, according to people familiar with the situation.

President Nicolas Maduro and an opposition coalition will send delegates to Mexico to reopen negotiations starting Nov. 26, according to the people, who asked for anonymity as the process has not been formally announced. The talks will include conditions for Venezuela’s 2024 presidential elections and could unlock $2.7 billion of government funds currently frozen by sanctions, they said.

Colombian President Gustavo Petro said in a post on Twitter that the talks will resume on Nov. 25 and 26. He is not involved in the process, however.

An official announcement is expected as early as Wednesday from the mediator Norway, which will be reinforced by the Venezuelan delegations, the people said. The initial plan is for the parties to meet in Mexico every 15 days.

Norway’s Foreign Affairs Ministry declined to comment on the specifics of negotiations. Neither the government nor spokespeople for the opposition replied to messages seeking comment.

The government of US President Joe Biden has repeatedly said it would reevaluate its sanctions policy if Maduro’s government made political concessions, starting with a return to the Mexico meetings. A first step may be a limited license for Chevron Corp. that would loosen some financial restrictions on the California-based driller’s operations in Venezuela.

US Treasury is considering granting the oil firm a time-limited license “contingent” on additional “specific commitments” after Maduro and opposition representatives resume their dialog in Mexico, according people who asked not to be identified. It would also prevent PDVSA from receiving profits from the oil sales by Chevron. Any announcement or action would not be taken in response to energy prices, but for Maduro’s government to take the steps needed to support the restoration of democracy in Venezuela, the people said.

Easing of international economic restrictions could help the country begin to pump more oil. Despite having the world’s largest crude reserves, Venezuela’s oil industry has been gutted by years of mismanagement, a lack of investment, and sanctions, which prohibit US companies financial activities in the country.

A State Department spokesperson said the US government supports the efforts made by the opposition coalition known as Unitary Platform in around the negotiations, and defer to them on anything further.

“The United States is not a party to negotiations between the Unitary Platform and the Maduro regime,” the spokesperson said.

The two sides are expected to open the meetings by signing an agreement that would unlock $2.7 billion of government funds currently frozen in international accounts that would be used to rebuild electricity grids and fund health projects, among other initiatives, according to the people familiar with the situation. The UN would oversee the work and administer the account. The potential sanctions relief is related to the announcement of other specific commitments to support the people of Venezuela, the people familiar said.

Maduro is in urgent need of cash to keep the nation’s recovery on track, as the economy stabilizes following one of the deepest slumps in world history, which caused more than 7 million people to flee the country.

Several previous rounds of talks collapsed, most recently in October 2021, when Maduro walked away from the table after the two sides reached only minor agreements.

The government abandoned those meetings after Maduro’s ally, Alex Saab, was extradited to the US to face money laundering charges.

--With assistance from Fabiola Zerpa and Nicolle Yapur.

(Updates with comment on dynamics of potential relief in 12th paragraph)