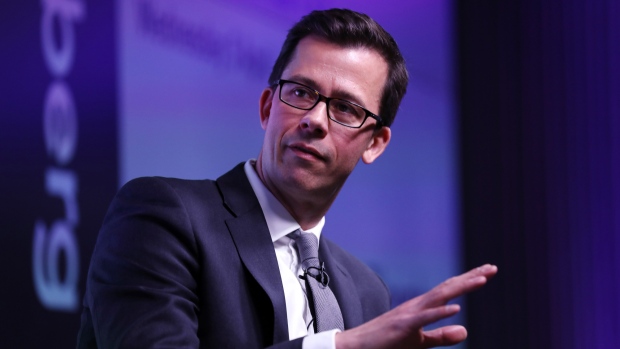 Gertjan Vlieghe, policy maker at the Bank of England (BOE), gestures during a speech at Bloomberg's European headquarters in London, U.K., on Wednesday, April 5, 2017. When it comes to raising U.K. interest rates, it’s better to be late than early, according to Vlieghe. Photographer: Chris Ratcliffe/Bloomberg , Bloomberg

(Bloomberg) -- A no-deal Brexit is more likely to require an easing than a tightening of monetary policy, according to Bank of England policy maker Gertjan Vlieghe.

The comments, made in a speech in London Thursday, are the clearest indication yet given by a member of the Monetary Policy Committee as to how policy makers would react should the U.K. leave the European Union without a deal on March 29.

In a dovish speech, Vlieghe also said that:

While officials have always said that Brexit could have implications in both directions for monetary policy, previous comments, notably by Governor Mark Carney, have focused more on the risk of the potential need for rate hikes should the U.K. crash out without a deal. Vlieghe’s view chimes more with the views of investors and economists, who say it would be difficult for officials to hike rates in such a chaotic situation.

“In the case of a no-deal scenario I judge that an easing or an extended pause in monetary policy is more likely to be the appropriate policy response than a tightening,” Vlieghe said. “We will have to judge in real time how well inflation expectations remain anchored, and how households and businesses are reacting to the disruptions.”

The economy has been weaker relative to what it could have been with a remain vote in the 2016 referendum, Vlieghe said. That weakness was primarily due to the slowing in global growth, reduced consumer spending power and sluggish business investment, he said.

“As we approach the March 2019 deadline without a clear way forward, concerns have intensified and investment has weakened further,” he said.

To contact the editors responsible for this story: Fergal O'Brien at fobrien@bloomberg.net, Brian Swint