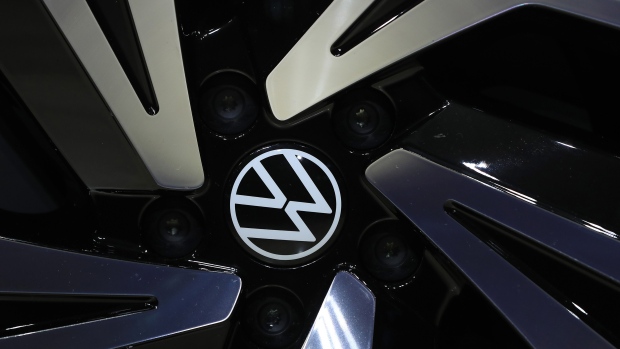 The wheel hub of a Volkswagen ID.5 electric vehicle. , Bloomberg

On April 11, 1983 in Shanghai, Volkswagen and its local partner assembled their first car in China, a boxy sedan called Santana. The model proved wildly popular, becoming a symbol of China’s rising middle class and cementing VW’s role as the country’s most prominent carmaker.

While Santana sales have since tapered off, it’s hard to overstate how important China still is for the VW group. The manufacturer delivered roughly 40% of its vehicles to the world’s biggest auto market in the first quarter. It employs more than 90,000 people in the country and operates over 40 vehicle and components factories along with partners.

“A large part of our bonus is created in China,” Diess said in a speech to staff in Wolfsburg, Germany. “We are doing everything to defend our position there as market leader.”

Keeping that top spot looks increasingly challenging. Volkswagen’s sales in China have fallen from a peak of 4.2 million cars in 2018 to 3.3 million last year. Its premium brands like Porsche and Audi are still doing fine, but the VW marque has been giving up market share.

The top domestic rival looks to be BYD, the Shenzen-based manufacturer backed by Warren Buffett’s Berkshire Hathaway. It’s on the cusp of entering the trillion-yuan market cap club after handling lockdowns, chip shortages and price increases better than many of its peers.

BYD may supply batteries to Tesla and is becoming more directly involved in lithium mining as it hopes to gain a long-term advantage in securing the key battery resource. BYD sold more than 320,000 EVs last year, while VW sold around 70,000 of its ID family of electric cars in China, well short of its internal target.

VW is changing tack in the US to gain market share, mainly by focusing on cars made in America catered to local buyers instead of shipping over European-designed models. It will have to do more of that as well in China, where some buyers put more emphasis on connectivity and entertainment than pure driving performance.

“Who of you here would spend 200 euros on a karaoke function?” Diess asked his workers Tuesday. “For many Chinese, it’s standard — so we must deliver on that.”

VW is setting up a regional China board to make better and faster decisions for its brands. Diess is dispatching Ralf Brandstaetter, the head of the VW passenger-car brand, to oversee the board, while former Huawei adviser Marcus Hafkemeyer will lead technology and VW Russia executive Stefan Mecha will head up sales.

There’s one more issue that won’t easily be solved with personnel changes. In return for allowing VW to expand its Shanghai factory, the Chinese government asked the carmaker to also set up shop in Xinjiang to bolster economic development in the northern province.

VW faces mounting pressure to address allegations that ethnic Uyghurs are suffering from coercive labor practices in the region. Two board members have recently voiced concerns. VW’s local partner in charge of its Xinjiang factory, SAIC, has said no workers are mistreated. Diess’s view is that VW’s presence in the region can be a force for good.

But the automaker is now facing pushback from the German government. Berlin recently declined a VW request to renew risk insurance for the company’s Chinese operations over human rights concerns, according to a person familiar with the matter. The rejection reflects a shift in tone on China, which became Germany’s biggest trading partner outside the European Union over the past two decades.

Diess is under pressure to address the issue himself. On Tuesday, he vowed to visit the Xinjiang plant as soon as Covid conditions allow. Just don’t expect VW to scale back its ambitions in the country.