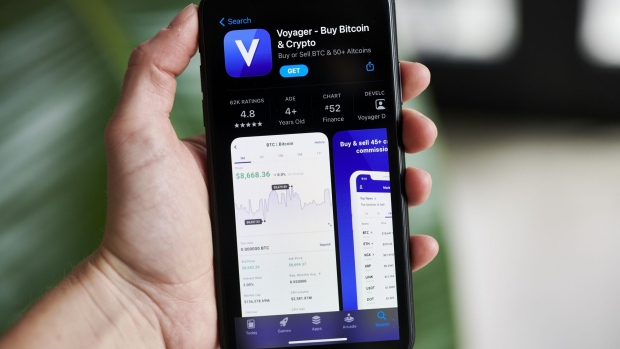 The Voyager Digital Ltd. application for download in the Apple App Store on a smartphone arranged in Little Falls, New Jersey, U.S., on Saturday, May 22, 2021. Elon Musk continued to toy with the price of Bitcoin Monday, taking to Twitter to indicate support for what he says is an effort by miners to make their operations greener. , Bloomberg

(Bloomberg) -- Voyager Digital Ltd. shares plummeted on Wednesday after the firm said it has received, or is aware of, cease and desist orders for its interest-earning cryptocurrency product from New Jersey, Indiana, Kentucky and Oklahoma.

The crypto investment firm is in ongoing communications with state regulators to better understand the orders and to “clarify certain statements in the orders that Voyager believes are inaccurate,” it said. The shares, which trade on the Toronto Stock Exchange, fell 21% as of 12:32 p.m. New York time.

Voyager has allegedly been financing income-generating businesses such as lending and staking of digital assets “at least in part” through selling interest-earning cryptocurrency accounts in violation of the Securities Law, New Jersey’s Bureau of Securities said in a statement on its website, calling the accounts unregistered securities. The accounts have raised at least $5 billion nationwide, the watchdog said.

There were about 1.5 million Voyager Earn Program Accounts as of March 1, of which around 52,800 were based in New Jersey, according to the statement. Clients invest in Voyager Earn by depositing eligible digital tokens into their accounts in return for an “attractive” interest rate that’s paid monthly in the same cryptocurrency they invested.

Voyager pools the cryptocurrencies deposited by such clients to fund its income-generating activities and investments in other digital-asset trading platforms, the Bureau of Securities said.

“The Voyager Earn Program Accounts are not registered with the Bureau or any other securities regulatory authority, nor are they otherwise exempt from registration,” it said. The lack of regulatory oversight “adds a layer of risk” and “makes it all the more important for individuals to do their homework and fully understand the offerings before investing in them.”

Scrutiny has been mounting on crypto lenders, which have attracted tens of billions of dollars in deposits by promising yields that far exceed those available through traditional savings accounts. Voyager competitor BlockFi Inc. agreed in February to pay $100 million to the Securities and Exchange Commission and state regulators as part of a settlement, and said it would seek SEC approval for accounts that pay clients high yields for lending out crypto.