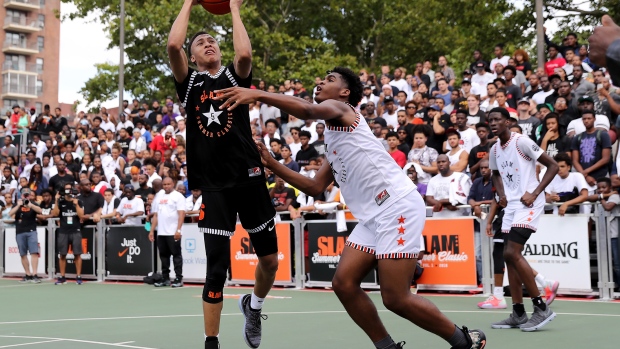 (Bloomberg) -- R.J. Hampton, a Texas high school basketball player who was recruited by the nation’s premier programs, has decided to skip college and turn professional on the other side of the world, meaning he’ll be paid while awaiting the 2020 National Basketball Association draft.

The 6-foot-5 point guard signed a two-year contract with the New Zealand Breakers, said team part-owner and managing director Matt Walsh. Because he signed a two-year deal, the Breakers will eligible to receive an $800,000 buyout from any NBA team that selects Hampton in the first round of the draft, Walsh said.

“It will be kind of a wake-up moment for college programs,” Walsh said, noting that Hampton was recruited by Kansas, Memphis, Duke and Kentucky. “People are going to think, ‘How on earth did they lose him to New Zealand?’”

Hampton will join the Breakers as part of the local National Basketball League’s Next Stars Program, which means he’ll be paid by the league and not the team. The standard contract for a player in the program is $100,000, but Walsh said Hampton would “far surpass that.” He declined to be specific.

The NBA and its players union have a 13-year-old rule that bars players from entering the draft directly from high school. Hampton isn’t the first high school player to opt for professional basketball over college since the rule came in, but he may be the best. Emmanuel Mudiay played in China and was the No. 7 pick in the 2015 draft, and Brandon Jennings spent what would’ve been his freshman season in Italy and then was selected 10th in the 2009 draft.

The provision has created what’s become known as “one-and-done,” whereby the best players attend college for one season before entering the NBA. The NBA and the union are in talks to abolish the rule, once again allowing high schoolers to join the league directly. Among those who who entered the NBA straight from high school are LeBron James, Kobe Bryant and Kevin Garnett.

Hampton’s decision comes as college sports grapples with increasing numbers of athletes who generate tens of millions of dollars for their schools seeking some form of compensation. The NCAA, the governing body for U.S. college sports, has weighed whether to let athletes profit from their names and likenesses. A number of administrators and coaches -- including Clemson University football coach Dabo Swinney, whose new contract pays him more than $9 million annually -- have said players shouldn’t be paid.

“There’s a capitalistic logic to someone wanting not to be engaged with playing for free, per se,” said Rick Burton, a former NBL commissioner who is now a sports management professor at Syracuse University. “This kid wants to start right away and he likes the sound of the Australian National Basketball League. It’ll be guaranteed money.”