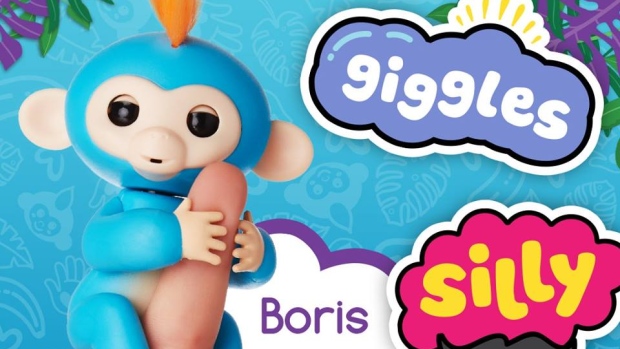 WowWee's Fingerling toys are expected to be one of the hottest sellers of the 2017 holiday season. , Image courtesy of Fingerlings Facebook page

Fingerlings, touted as one of the hottest toys this holiday season, are already selling fast.

“We are selling it as we get it,” Chief Merchandising Officer Steve Bratspies said on a call with reporters. “There’s not tons of excess, but we feel good about where we are.”

Fingerlings -- plastic monkeys that hang onto a child’s finger, blink their eyes and blow kisses -- were featured in Wal-Mart’s list of the top toys of the season. Toy Insider, an industry publication, also has named the product to its roster of the most coveted items.

In some stores, customers are grabbing them as soon as they appear on shelves, Bratspies said. On Wal-Mart’s website, a listing for the toy shows three out of four colors out of stock -- with the only color available (black) being sold by a third-party seller, not by Wal-Mart.

“It’s Hatchimals all over again,” said a commenter on a Reddit board frequented by Wal-Mart employees, referring to last year’s biggest toy craze. “We get four cases at a time, they’re gone by the next day.”

“We’re doubling down on the in-store experience,” Chief Marketing Officer Tony Rogers said on the call.