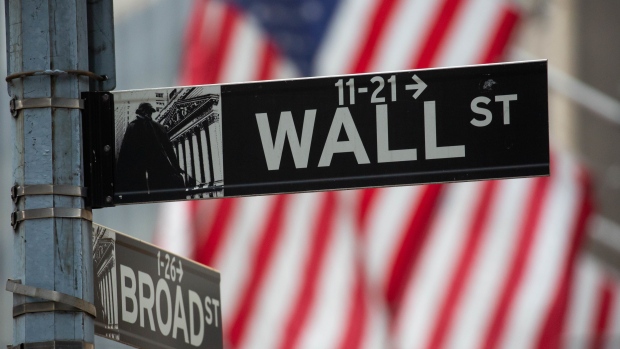 A Wall Street street sign in front of the New York Stock Exchange (NYSE) in New York, U.S., on Friday, Dec. 31, 2021. U.S. stocks swung between gains and losses, with moves exacerbated by thin trading on the last session of the year. , Bloomberg

(Bloomberg) -- Wall Street banks are rethinking their involvement in the listings of special purpose acquisition companies in the Middle East’s nascent market as new liability guidelines from US regulators chill the once red-hot industry.

Middle East SPAC sponsors such as Gulf Capital and Investcorp were initially in talks with Citigroup Inc. and Bank of America Corp. respectively, but they are likely to rely on local banks to finalize the deal, according to people familiar with the matter. It’s unclear what role either US bank will play, if any.

Citigroup will be very cautious in accepting new SPAC mandates in the region although it won’t pull back completely and could step up work depending on how the final rules in the US look, the people added, who asked not to be identified discussing private matters. Bank of America has also paused work on SPACs more broadly while the US rules are being finalized.

Goldman Sachs Group Inc., which has pulled out of working with most SPACs it took public, is currently not chasing blank-check firms in the Middle East, people familiar with the matter said. JPMorgan Chase & Co. is being similarly cautious.

While the region’s local banks are expected to step in to fill the hole, the US pullback from the Middle East’s fledgling market underscores the global repercussions the proposed SEC guidelines have had on the industry, which has gone from being one of Wall Street’s hottest fads at the peak of the pandemic to a sector beleaguered by poor returns, pulled deals and fading investor enthusiasm.

The proposals from the Securities and Exchange Commission unveiled three months ago would expose underwriters to greater liability risk, among other measures tightening the screws on the once free-wheeling industry, prompting US banks to scale back their work with blank-check firms.

The Middle East is just one of the markets which has sought to get in on the action, with the likes of London, Hong Kong and Singapore all unveiling regulatory frameworks for blank-check firms in the past two years even as the market in the US sputtered.

The vehicles are empty shells that go public with a view to merging with a private company in a fixed time period, usually two years. They exploded on Wall Street at the height of the pandemic bull market, raising $162 billion last year in the US alone, data compiled by Bloomberg show.

But activity has since slowed, as existing SPACs struggle to find targets, planned ones get pulled and those that have merged with a company trading so low as to become buyout targets.

The Middle East has only just started its foray into blank-check listings, with a vehicle backed by wealth fund ADQ and Chimera Investments becoming the first listed SPAC in the region last month.