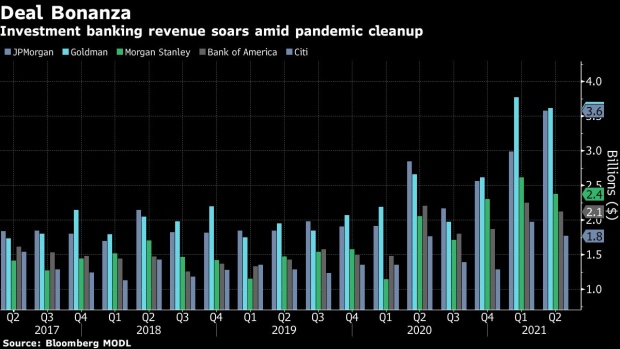 Pedestrians walk along a street in the Financial District of New York, U.S., on Wednesday, May 12, 2021. With 37% of Manhattan fully vaccinated, the city's finance industry, slowly, is getting back into the office. , Bloomberg

(Bloomberg) -- Wall Street leaders are pressing ahead with bringing employees back to the office, seeking to resume something that resembles normal work life as soon as possible, even as they keep a wary eye on Covid-19 variants.

“At the beginning of Covid, in February of 2020, when I was asked how would this end up, I think I said that I felt 80% of all employee hours worked would be done in one of our offices,” said Morgan Stanley Chief Executive Officer James Gorman. “And that’s probably where it’s going to end up -- not 100% but not zero percent.”

Bank of America Corp.’s Brian Moynihan said he hopes to bring younger staff in front of their bosses soon, but the virus will dictate plans. Citigroup Inc., also watching the evolving delta variant closely, is forging ahead with its flexible approach.

Bankers are yearning to get back to business-as-usual after posting solid second-quarter earnings which showed Wall Street escaped the pandemic mostly unscathed. While executives want to see their offices buzzing again, investors would like to see a pickup in consumer spending translate to more borrowing. Meantime, investment bankers turned in some of their best profits this quarter and firms continue to release reserves, helping to juice profits.

Here are some other key takeaways from earnings in the quarter.

Consumers are spending, not yet borrowing

Consumers are spending again, but they still aren’t borrowing. The massive stimulus the U.S. government has pumped into the economy means there’s little demand for loans – except among wealthy clients.

While major consumer lenders, including JPMorgan Chase & Co., Wells Fargo & Co. and Bank of America saw weak results in income earned from loans, executives are optimistic that overall results will improve as the economy continues to open up.

“The pickup in spend is going to translate to, as I say, resumption of loan growth,” said JPMorgan Chief Financial Officer Jeremy Barnum during the firm’s earnings call.

But because consumers are still keeping up with their bills and employment has been improving, banks have been able to release billions in reserves they’d set aside during the worst of the pandemic. That’s bolstered profits.

The heydays of pandemic-induced volatility that have supercharged trading revenue may be over. Revenue from trading plummeted in the quarter at all of the biggest banks, much of that because of tough comparisons to last year when trading desks saw a surge in activity.

Bank executives were eager to show the darkest days of the pandemic are behind them, and described how the economic recovery remains on track. Executives including at Bank of America and Citigroup noted how economic conditions are improving, which could help bolster gains in credit, consumer lending and investment banking in the months ahead.

“There is a general sense of optimism,” said Citigroup CEO Jane Fraser. “One never wants to jinx these things, but we really have a fabulous pipeline heading into the second half of the year around the world and it does give you a good sense of confidence of continued momentum.”

Trading slumped, but dealmakers are turning in some of their best performances on record as the economic recovery spurs M&A activity. Bankers are racing to keep up with demand as companies bolster finances, pursue takeovers and take other steps to realign their strategies for an improving landscape. Morgan Stanley, Goldman Sachs Group Inc. and JPMorgan were among firms that took in massive investment banking hauls this past quarter.