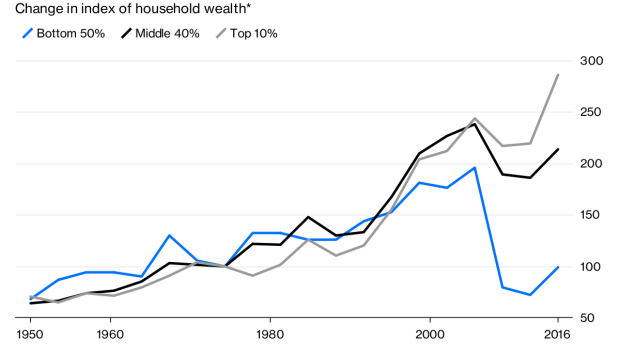 (Bloomberg Opinion) -- President George W. Bush pledged to make the U.S. an “ownership society” and tried to promote homeownership via tax credits, assistance with down payments and a variety of other programs. In 2004, this probably looked like a good bet -- the U.S. homeownership rate had risen to about 69 percent, from 64 percent in the mid-1990s. But Bush failed. Just a few years later, a deflating housing bubble followed by a financial crisis and recession sent homeownership into a nosedive:

During the crisis, President Barack Obama did too little to protect the ownership gains that Americans had enjoyed in the late 1990s and early 2000s. Hamstrung by a recalcitrant Congress and an internal distaste for bailing out citizens who made bad real estate decisions, Obama enacted only a modest program to reduce foreclosures. The result was that homeownership fell to levels not seen since the mid-1960s. Now it’s recovering, but if another recession hits, all bets are off.

So when people lost all those houses, what happened them? Some houses were snapped up by more financially secure homeowners looking for a second or third house to own or rent. Some were taken over by banks or traditional property-management companies.  But during the crisis, a new type of landlord rose to prominence: Wall Street.

During the crisis, financial companies -- private-equity firms, hedge funds, asset managers and real estate investment trusts -- bought up large numbers of foreclosed homes and rented them out to tenants. Some of the big names include Blackstone Group LP, Cerberus Capital Management and Tricon Capital Group Inc.

Some of this buying activity was intended to buy cheap houses and then sell them for a profit. But some companies realized they could make more money from holding onto the houses and renting them out. A 2015 paper by economists James Mills, Raven Molloy and Rebecca Zarutskie explored the emergence of what they call the large-scale buy-to-rent business model. Mills et al. defined the strategy narrowly -- they estimated that only 0.14 percent of the U.S. housing stock was owned by these investors in 2014. But they found that 6 percent was owned by corporate investors overall, which is a much more sizeable chunk of the market.

Nor was this new business model a temporary feature of an economy in crisis -- on the contrary, buy-to-rent seems to be turning into a permanent and growing feature of the housing market. Bloomberg News’s Patrick Clark reported that after falling since 2012, home buying by Wall Street players increased in 2017. Amherst Capital Management LLC, itself a player in the space, reported that much of the increase came in Sun Belt cities such as Atlanta and Charlotte, North Carolina. Amherst also found that the industry is consolidating as a few big players gobble up smaller ones. What’s more, Amherst reports that securitization of the income from single-family rentals is an increasingly common practice.

Wall Street’s move into single-family rentals has a number of potential downsides. First of all, although the practice still represents just a small slice of the nationwide market, Mills et al. report that its impact in a few locations was considerable. In the cities and neighborhoods where Wall Street investors own large pieces of the market, these big companies could use their power to raise rents in whole neighborhoods. That in turn could contribute to the rent crisis now afflicting many of the nation’s big cities.

Wall Street landlords may also compromise quality. Their local dominance may afford them the luxury of simply ignoring tenants’ needs, especially in cities without strong protections for renters.

But the most troubling impact could be on the American Dream of homeownership. Increasingly, young Americans looking to buy houses will be competing with big corporate landlords. There are a number of reasons that competition will not favor the aspiring homeowner. Big landlords have cheap financing at their disposal -- securitized bonds, REIT share sales -- while individuals have to rely on mortgages. Big landlords may also value a house more, due to the high rents that their local market power lets them to squeeze out of tenants.

Most Americans tend to have the bulk of their wealth in their houses. If fewer young Americans are able to buy homes, they’ll miss out on house price appreciation, and the gains will go to corporate shareholders, who tend to be rich people. Thus, the rise of the Wall Street landlord model may put a damper on U.S. middle-class wealth accumulation. That would be a very unwelcome prospect at a time when the middle and lower classes have seen a big drop in their wealth:

The U.S. government should think hard about whether it wants to allow the dream of homeownership to be shortchanged by big corporate players. The situation may call for a tax on corporate landlords, or on landlords who own a high percent of the housing in a particular area, as well as measures to help Americans of modest means buy homes. In other words, it might be time to give Bush’s ownership society a second shot.