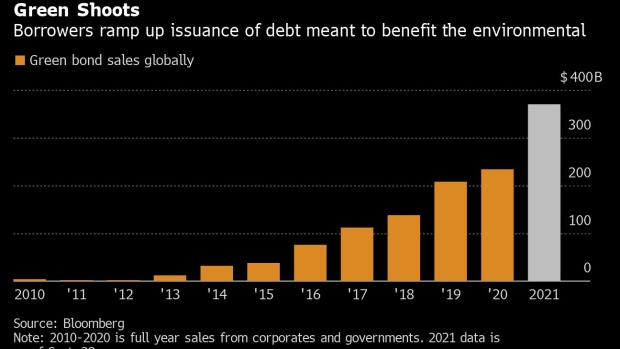 A nearly empty parking lot stands outside the Walmart Inc. World Headquarters in Bentonville, Arkansas, U.S., on Thursday, May 28, 2020. The annual Walmart Inc. shareholder celebration attracts a varied crowd who pour money into the hotels, bars and restaurants in and around the retailer's hometown of Bentonville, Arkansas. The Covid-19 pandemic forced Walmart to pivot to a virtual gathering on June 3. Photographer: Terra Fondriest/Bloomberg , Photographer: Terra Fondriest/Bloomberg

(Bloomberg) -- Walmart Inc. is looking to sell more sustainable debt amid pressure for the retail industry to reduce its carbon emissions.

The world’s biggest retailer made its debut in the green bond market earlier this month with a $2 billion offering, the largest ever from a U.S. corporation. The transaction was part of $7 billion bond sale spread across five parts with the green tranche receiving the most demand from investors, according to Kathleen McLaughlin, executive vice president and chief sustainability officer.

McLaughlin said Walmart may sell additional bonds under the environmental, social and governance umbrella later as it focuses on selecting and executing eligible initiatives in the future, but for now the focus is disclosing to credit investors the completion of the projects and their impact on the environment.

“If this goes well, watch this space,” McLaughlin said in a telephone interview Friday. “I could see us broadening over time and having other ways to participate in sustainability frameworks on the debt side.”

The Bentonville, Arkansas-based company said separately last week that it will spotlight particularly healthy or sustainable products with a new “Built for Better” tag on its website as consumer companies from retail giants to PepsiCo Inc. rush to satisfy customers who are rethinking the impact of their spending in ways they didn’t before. For Walmart, that means acknowledging that its famous formula of everyday low prices isn’t enough for a growing number of shoppers.

Corporations and governments globally have sold a record $369.7 billion in green bonds so far this year, compared with $234 billion raised in all of last year, data compiled by Bloomberg show. The record issuance hasn’t stifled the price advantage for borrowers and the bonds are performing better in the secondary market than equivalent debt without the tag on average, according to the Climate Bonds Initiative. While Walmart believes there was some pricing benefit, that wasn’t its focus for issuing the debt, a company spokesperson said.

Walmart has a median percentile of 51.4 among its retail peers on environmental issues, according to Bloomberg Intelligence compiled ESG scores. Target Corp. is near the top of the peer group with 86.1 while Costco Wholesale Corp. has a percentile of 29.2. The zero to 100 rating -- 100 is the most environmentally friendly  -- is based on indicators including greenhouse gas emissions, waste management, and sourcing in supply chain, said BI ESG analyst Rob Du Boff.

Walmart said in a statement Thursday that it intends to allocate an amount equal to the net proceeds of the $2 billion offering toward a portfolio of eligible green initiatives, including more efficient energy storage units, high performance buildings, waste recycling and water efficiency. Walmart has a target of achieving zero emissions by 2040 and also aims for a 1 billion metric ton cut in emissions from its supply chain by 2030, according to its green financing framework.

“Our ambition is to decarbonize the sector,” said McLaughlin. “That may sound a little grandiose but that’s really what we’re trying to do in partnership with many others.”