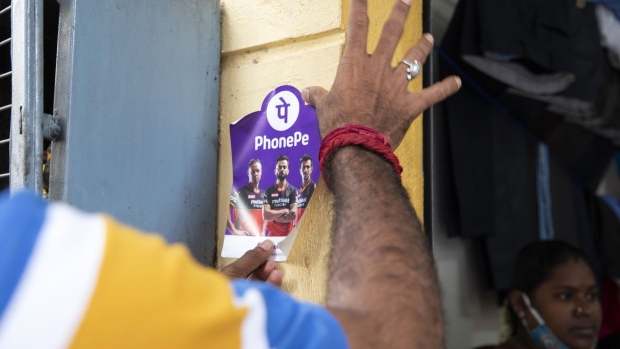 A PhonePe employee places an advertisement for the company's digital payment system outside a grocery store in Bengaluru, India, on Tuesday, Sept. 28, 2021. As online payments and digital loans in the second-most populous country soar at some of the fastest rates worldwide, money is pouring into India’s financial technology sector at an unprecedented pace. Photographer: Samyukta Lakshmi/Bloomberg , Bloomberg

(Bloomberg) -- Walmart Inc.-owned digital payments brand PhonePe is seeking to raise as much as $1 billion from General Atlantic and existing investors including Tiger Global Management, Qatar Investment Authority and Microsoft Corp., people familiar with the matter said, even as global funding dries up for startups.

The all-equity round is expected to close in the next two weeks and may take PhonePe’s valuation close to $13 billion, including new capital invested, said the people, asking not to be named as the details of the deal are private. The valuation catapults PhonePe among India’s most valuable brands in a digital payments market forecast by Boston Consulting Group to triple in size to $10 trillion by 2026.

The company is in talks with SoftBank Group Corp.’s Vision Fund, an investor in PhonePe’s parent entity Flipkart, although Walmart will remain top investor, the people said. Forced to go on the defensive due to its portfolio losses, SoftBank has cut its investments sharply this year.

PhonePe declined to respond to emailed queries about the fundraising.

The new valuation would give Bangalore-headquartered PhonePe a higher valuation than arch-rival Paytm’s parent One97 Communications Ltd., whose market capitalization has dropped to $4 billion — down about 70% from its market debut last year. Competition is escalating between PhonePe, Paytm, Alphabet Inc.’s Google Pay and Amazon.com Inc.’s Amazon Pay, as well as a raft of startups looking to capitalize on India’s fast-digitizing economy. SoftBank also backs Paytm.

PhonePe is closer to profitability in its core business, one of the people said. Revenue at the digital payments player grew about 140% to 16.5 billion rupees ($200 million), while losses narrowed by about 15% in the business year ended in March, the company said.

A funding drought continues to plague India’s startup ecosystem, where companies are slashing headcount by the thousands and putting on hold plans to go public as valuations plummet.

To prepare for an initial public offering, which the people said is at least 18 to 24 months away, PhonePe has flipped its headquarters to India from tax-friendly Singapore. The company will be an entity directly under the Walmart umbrella, instead of under Flipkart, they said.

Launched in 2015 by former Flipkart executives Sameer Nigam, Rahul Chari and Burzin Engineer, PhonePe was soon acquired by Flipkart. PhonePe came under Walmart’s ownership when the US retailing giant bought Flipkart in 2018 for $16 billion. The startup had 415 million registered users and 30 million registered merchants around India as of last month.