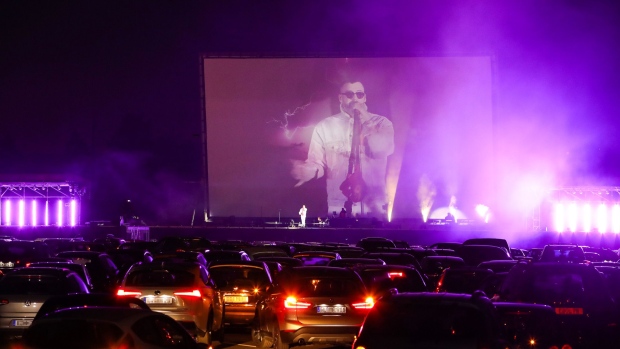 In his 2018 memoir, Don’t Stop Believin’ , Journey keyboardist Jonathan Cain describes the inspiration for one of the band’s biggest hits. “Somewhere in the hum and steady rocking on a tour bus heading to Saratoga Springs, I heard a tune in my dreams and thought of lyrics that woke me up,” he writes. “Finding a pen in the dark, I scribbled the words on a napkin, something I’ve never done before. Highway run into the midnight sun.”

So opens Faithfully, the song that cemented Journey’s status as kings of the power ballad. Its music video, a behind-the-scenes look at life on the road, similarly elevated the status of the tour bus—as much a romantic symbol of touring as the stage itself.

Traveling like that is a potent fantasy, as anyone who got misty eyed during the tour bus rendition of Tiny Dancer in Almost Famous knows. For the average person, it’s always been just that—a fantasy—at least until this summer, when COVID-19 put the concert industry in park.

Senators Coaches, the Florence, Ala.-based company whose buses were featured in the video for Faithfully, had planned to have nearly all of its 85 coaches on the road with such acts as the Rolling Stones, Elton John, Eric Clapton, Pearl Jam, and Jimmy Buffett. But it’s now pivoting to the un-famous and giving the general public the opportunity to “ride like a rockstar.”

For about US$2,500 a day, anyone in the U.S. can now charter a Senators coach to travel wherever COVID-19 guidelines and common sense permit. Included in the rate are a driver and fuel; you’ll have to supply your own groupies and autograph seekers.

Any Way You Want It—Almost

A Senators “Star Coach” is designed to feel as luxurious as possible: a 45-foot-long hotel suite on wheels. In the front lounge areas, which expand outward when the coach is parked, are kitchenettes with stainless steel appliances, leather seating, and big-screen TVs.

In the back, a bedroom has a queen-size bed, plus from four to six bunks with privacy screens (for kids and freeloading friends), as well as two bathrooms. For Brady Bunch-sized family reunions, there are “Entertainer” coaches whose configuration features from 8 to 12 bunks but no separate bedroom. Some have unique finishes, such as silver-tiled kitchen backsplashes or glossy wood paneling, but the designs are largely similar.

Can you request a bus from Pearl Jam’s last tour? Sure. But don’t expect to find guitar picks between the seat cushions; the coaches are thoroughly cleaned and sterilized with electrostatic sprayers before you’ll set foot on board.

The kitchens on Senators coaches are, for the most part, limited to microwaves and refrigerators, but this is for some very rock ‘n’ roll reasons—big tours have their own craft services. (No brown M&M’S, and so forth.)

Senators also cut back on onboard kitchens after an unfortunate incident about 25 years ago, when a paper bag was placed on an electric burner in a bus’s kitchenette while it was parked backstage. Someone accidentally turned on the burner, which ignited the bag and destroyed the bus.

What makes the incident the stuff of rock legend? According to Senators president Frierson Mitchener, “The brown paper bag on the stove—it was the merch money,” or, the cash collected from the stands that sell T-shirts and records. “Not only did they set the bus on fire, they set it on fire with US$20 bills."

Needless to say, drivers are—paradoxically—master tellers of such stories, while also being models of discretion often enforced by non-disclosure agreements. They’re also well versed in the best places to eat along pretty much any highway or byway you may be traveling, turning that lack of a full kitchen into an opportunity for discovery.

All drivers are limited to 10 hours a day at a clip, enough to get you from New York to Detroit or from Yellowstone National Park to Moab. And they’re happy to drive by night so you can wake up in a new destination each day—just as on a cruise ship but on dry land without 6,000 other guests.

“Providing work for our drivers is the most important thing we can do right now,” says company owner George Pillow Jr. “They’re the top of the line—the key to [our success in] the touring industry.”

While Senators is leaning hard into its music industry heritage, Pillow is also promoting coach travel as a “safer, more comfortable, and more convenient alternative to flying and staying in hotels.”

It is the kind of repositioning that’s become necessary across a concert industry that’s been turned on its head. “2019 was the best year in the history of the company; it looked like 2020 was going to be better,” says Pillow. That sentiment was shared by the trade magazine Pollstar, which reported in April that most agents, promoters, and managers were forecasting 2020 to be a record-setting year.

In its Entertainment & Media Outlook for 2019-2023, PricewaterhouseCoopers estimated that the industry—which raked in US$10.5 billion in the U.S. in 2018 — would reach US$12.8 billion in annual revenue by 2023. COVID-19 has erased those gains; early projections of lost ticket sales for this summer alone top US$5 billion, with significant job losses in the industry.

Senators isn’t the only company executing a creative pivot to fill the gap. Performers have turned to both streaming concerts and drive-in theaters. Mountain Productions, which builds massive stages for everyone from Metallica to the Pope, now talks up “structures for social distancing” on its site.

Seattle-based Black Caviar, a catering company that provides restaurant-grade backstage meals to the likes of U2 and Rihanna, has shifted to corporate clients, sending gourmet snack boxes to far-flung participants of virtual conferences as a way of recreating communal meal experiences.

Senators’ establishment status among the musical elite notwithstanding, it’s a newcomer in the world of luxury motorcoach companies. Goss RV of Atlanta already has years of experience planning trips that can cost up to $9,000 a day, and its fleet of coaches are blinged-out with outdoor entertainment systems and gourmet kitchens.

Where you go is up to you. There’s enough storage beneath a Senators bus for all the bikes and outdoor gear you might need on a great adventure. Or you could travel through the Americana Music Triangle, an informal route connecting Nashville, Memphis, and New Orleans, with your driver sleeping in a hotel while you spend your days exploring. And remember to keep a napkin and pen next to your bed for when inspiration strikes.