With U.S. equity indexes rising to fresh records again this week, one of Warren Buffett’s most-famous catchphrases comes to mind: Investors should “be fearful when others are greedy.”

Any Buffett disciple who checks in on the billionaire investor’s favorite market valuation metric these days may get the urge to shriek in terror.

The “Buffett Indicator” is a simple ratio: The total market capitalization of U.S. stocks divided by the total dollar value of the nation’s gross domestic product. It first crossed above its previous dot-com era peak in 2019. Still, it has been trending higher for decades, and if there’s one mantra investors love even more than Buffett’s it’s, “the trend is your friend.”

However, in recent weeks, even that long-term trend fails to justify the metric’s frothy appearance. With U.S. market cap more than double the level of estimated GDP for the current quarter, the ratio has surged to the highest-ever reading above its long-term trend, according to an analysis by the blog Current Market Valuation, suggesting a “strongly overvalued” situation. 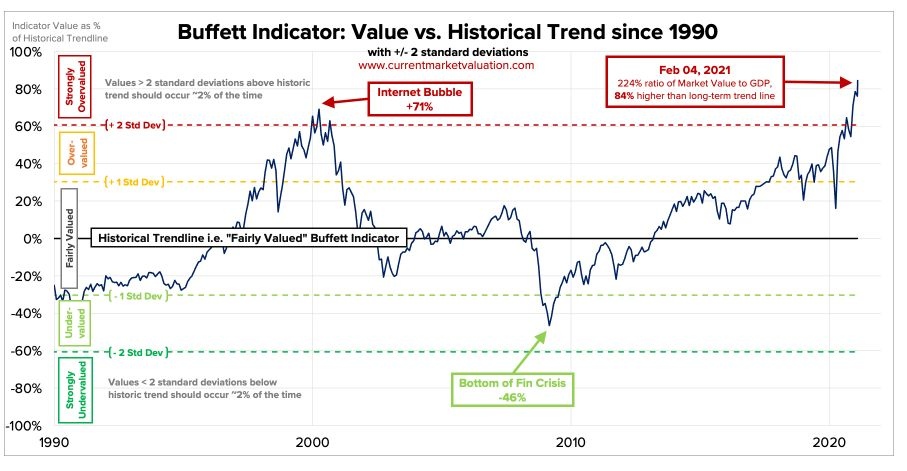 Of course, with the Federal Reserve holding rates near zero and buying bonds for the foreseeable future, and an abundance of savings and fiscal stimulus set to trigger blockbuster growth in GDP and corporate earnings, it’s fair to wonder if this is yet another of the many false alarms that have sounded during the past decade.

“It highlights the remarkable mania we are witnessing in the U.S. equity market,” said Michael O’Rourke, chief market strategist at JonesTrading. “Even if one expected those (Fed) policies to be permanent, which they should not be, it still would not justify paying two times the 25-year average for stocks.”

This detachment of the Buffett indicator from its long-term trend joins an assortment of other valuation metrics that have exceeded their previous records in the rebound from the pandemic-induced bear market last year -- if not years earlier. Price-to-earnings, price-to-sales and price-to-tangible-book value are among the metrics firmly above dot-com era levels that many investors assumed were once-in-a-lifetime peaks.

READ MORE: The king of SPACs wants you to know he’s the next Warren Buffett

Rising valuations are famously bad tools for timing market tops. Indeed, all tools are. For now, many investors are confident to bet that the recovery from the pandemic will boost some of the denominators in ratios like these, so they’re not letting valuations scare them off. The S&P 500 gained 1.2 per cent for the week to close at a record amid a pickup in vaccine distributions and progress on a new fiscal stimulus package. Energy, the best-performing sector this year, led the advance, adding 4.3 per cent.

Meanwhile, the yield on 10-year Treasuries hit 1.20 per cent on Friday, the highest since the pandemic-induced crash last year. Interest rates are still unlikely to be approaching a level that would undermine the bull case for stocks, given the S&P 500’s earnings yield is 3.1 per cent. Speaking to the Economic Club of New York this week, Fed Chair Jerome Powell re-emphasized that the central bank’s stimulative policies will not be dialed back anytime soon.

“When you compare it to fixed income markets, and with the rates where they are, the earnings yield for stocks is still positive,” said Anu Gaggar, senior global investment analyst for Commonwealth Financial Network. “And now with the Fed keeping rates at these low levels, that just gives comfort to the market.”