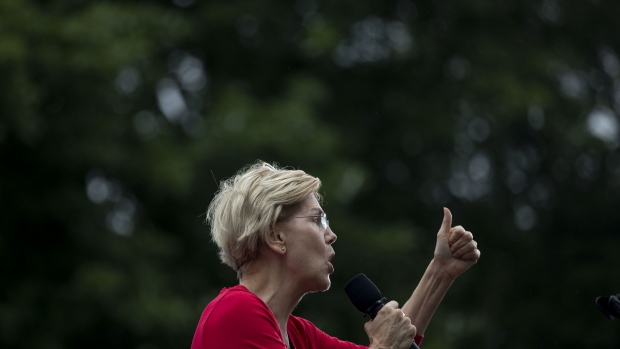 (Bloomberg) -- Democratic co-frontrunner Elizabeth Warren was asked at a CNN town hall on lesbian, gay, bisexual and transgender issues what she’d say to a supporter on the campaign trail who says their faith teaches them that marriage is only between one man and one woman.

Her response is going viral.

“Well, I’m going to assume it’s a guy who said that and I’m going to say, “Then just marry one woman. I’m cool with that.” She paused as the crowd laughed and applauded. Then resumed: “Assuming you can find one.”

The question strikes at a key issue for the progressive Warren, who has faced concerns over how she’ll approach voters who flipped from Barack Obama to Donald Trump, especially in rural areas and the Midwest. Yet Warren has methodically risen in Democratic primary polls in recent months into a virtual tie with former VP Joe Biden, who pushed the Obama administration to embrace same-sex marriage equality but hasn’t defined as clearly how he’d move from this point forward.

To contact the reporter on this story: Derek Wallbank in Singapore at dwallbank@bloomberg.net

To contact the editors responsible for this story: Chua Baizhen at bchua14@bloomberg.net, Chelsea Mes