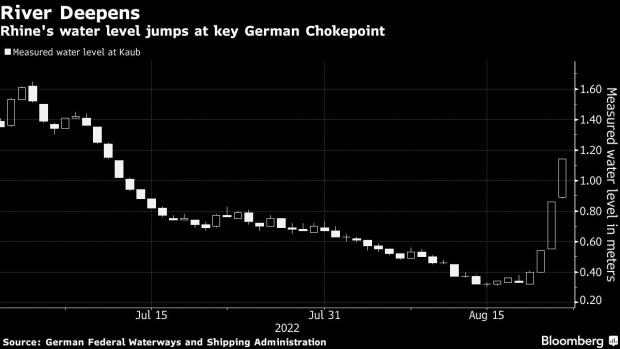 A barge travels past exposed riverbed on the River Rhine in Kaub, Germany, on Friday, Aug. 12, 2022. The Rhine River fell to a new low on Friday, further restricting the supply of vital commodities to parts of inland Europe as the continent battles with its worst energy crisis in decades. , Bloomberg

(Bloomberg) -- The Rhine River’s water level is forecast to rise even higher at a key German chokepoint following a surge over the weekend, making it easier for barges carrying vital commodities to navigate.

The measured water level at Kaub, which lies to the west of Frankfurt, rose by about 75 centimeters (30 inches) since Friday to around 115 centimeters. That takes it well past the 40-centimeter level above which it becomes economical for many barges to carry at least some cargo through the waypoint. It’s expected to peak at 154 centimeters on Tuesday before heading lower again, according to German government data.

Millions of tons of iron ore, coal, chemicals, oil products and other goods are shipped along the Rhine each year, which snakes roughly 800 miles from the Swiss Alps to the North Sea. Low water levels have severely hampered shipments along the waterway in recent weeks, frustrating operations at industrial facilities including Germany’s biggest oil refinery.

To be sure, the crisis seems far from over. The water level at Kaub is forecast to edge lower again from tomorrow afternoon, falling to 119 centimeters on Friday morning local time.

“The continuing very low water levels on the Rhine and its tributaries are increasing the demand for additional tonnage and driving prices up to critical levels,” container transport company Contargo GmbH & Co. KG said in a statement on Monday. “Substantial bottlenecks continue to affect our services in the rail network and inland navigation.”

Historical data show that, on a 20-year average, the Kaub water level is actually at its lowest in early October -- suggesting it could fall further in coming weeks. Prior to November 2013, data were tallied on a daily, rather than intraday basis.

The measured water levels are not the actual depth of the river, but are markers used to calculate navigability.