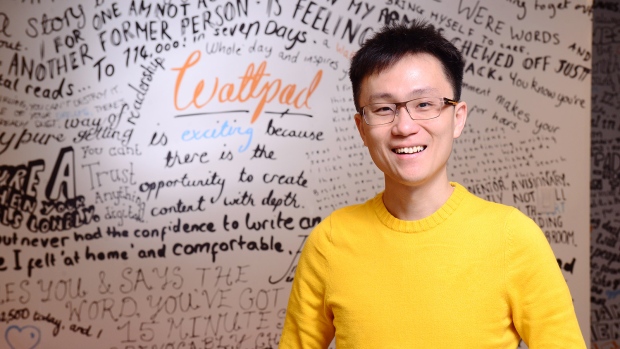 TORONTO -- When Wattpad Corp.'s co-founder thinks about the future of his tech company, he envisions using machine learning and data to tweak stories that will be streamed on car entertainment systems or through voice assistants like Alexa and Siri.

Allen Lau included these ideas in a blog called "the Grand Plan," which he posted Thursday. It was released a year after Wattpad, a Toronto-based storytelling platform, was sold for US$600 million to Naver, the South Korean internet conglomerate behind the Webtoon digital comics platform.

Lau, who remains chief executive of Wattpad, is now plotting the company's path forward under new owners and in a pandemic environment, where screen time has soared and Wattpad's user base has expanded at record speed to reach 94 million readers.

Though users have kept reading Wattpad stories as businesses reopened, competition for attention is stiff because people are swimming in entertainment options.

"Entertainment is going through a period of disruption, where the amount of streaming content continues every year to expand and the need for original intellectual property is higher than ever," Lau said.

He hopes to keep people hooked on Wattpad with a plan centred around machine learning.

The company already uses the technology to crunch data about which stories and writers readers most enjoy, but Lau feels Wattpad is only "scratching the surface of possibilities."

He wants to use artificial intelligence to provide writers with more fan feedback, which could be especially helpful for those who write and release chapters incrementally. The information could include what characters readers like or dislike, when they stop reading and what passages are their favourites.

"The writer has creative choice, but knowing what the audience would like they can intelligently adapt the story and in a nice way, perhaps change the ending," Lau said.

Machine learning and data will also help Wattpad make more calculated decisions around which stories get the print or big screen treatment, a departure from the current Hollywood model that often options books based on "gut instinct."

Branching out beyond digital stories has been a key part of Wattpad's growth since the platform spawned "After," a steamy fanfiction series about a college girl who falls in love with a character modelled after pop star Harry Styles.

Fan fiction is a growing literary genre based on fictionalized stories about celebrities or characters from pop culture.

The After series was released in 2013 by Anna Todd, a Texas woman who wrote the tale from the back seats of cabs, the waiting room at her doctor's office and the aisles of grocery stores.

It has since been made into several films and print books that sold 15 million copies in 35 languages, paving the way for dozens of other Wattpad stories to get the Tinseltown treatment.

At least 100 stories are now being adapted for film, television or print books, Lau said, and the company has US$100 million planned for development, production financing and accelerating timelines.

What they create with that financing won't be limited to shows, movies and books. Lau wants a dedicated podcast channel for Wattpad stories and people to listen to tales on Siri or Alexa as they cook or even as they drive.

"Wattpad is format agnostic. At its core, we are a storytelling company and we already adapted to so many different formats," said Lau.

"Audio is one of the biggest and so unexplored."

The final piece of Lau's plan will be aimed at helping more storytellers on his platform earn larger sums for what they write.

"I still believe we are in Chapter 1 or Chapter 2 or Season 1 or Season 2 of monetization," he said.

"There is so much more we can do."

While he didn't offer specifics on how he will achieve this goal, he hints that it could involve non-fungible tokens, a new digital asset that people collect, or Web3, an emerging and decentralized version of the internet.

The first time Lau wrote a note like the one released Thursday was in 2006, when he and Wattpad co-founder Ivan Yuen wanted to build a reading app, attract writers to it and help them build fandoms and earn money.

The next note came in 2016 and was meant to herald in an era of monetization by turning successful Wattpad stories into hit movies, TV shows, print books and other media.